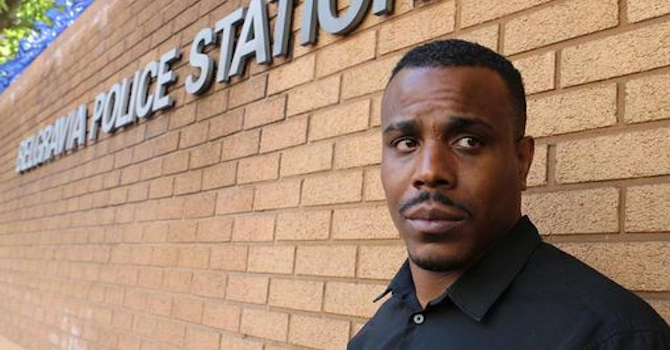 Mike GLC has come out in a TV Interview on NBC claiming that the footage which exposed him and Tulisa as drug dealers was ‘edited and chopped together.’ Yeah right.

Mike GLC huh? Nobody even knew who this dude was a couple of days ago now nobody can stop talking about him. Well, not really but the fact he has a really stupid name certainly makes him more likely to be talked about in relation to the Tulisa ‘cocaine fixing’ scandal that we’ve been so wrapped up in in the last couple of days.

And it seems like he’s really embraced this whole newfound fame thing as he was the one who talked to the press following his and Tulisa’s release from police custody yesterday. Or Tulisa just decided to send her lackey to go talk to the press while she escaped through a backdoor because she’s a millionaire and he’s just some drug dealer come rapper called Mike GLC who nobody really cares about. That’s probably it huh?

Anyway, this interview is pretty jokes as despite how many times Mike GLC says it during the interview he doesn’t even seem convinced himself that he and Tulisa are innocent (well him especially, as I discussed yesterday I don’t really think Tulisa did anything that bad by hooking a brother up with a connect) and looks even more unconvincing when questioned about the video footage saying ‘anyone can edit and chop together videos can’t they?’ Yeah, nice try but they probably can’t do it that well, I mean it’s not like it was a VINE post was it, it was an actual video mate.

He ends it with an optimistic ‘we’ll have to see, the truth will come out in the end won’t it?’ Well yeah, some would argue the truth already did come out with that video that The Sun posted up a couple of days ago but I guess we’ll still have to see what the official world is whenever that’s released. They’ll probably get away with it – because they always do – and it’ll probably be blamed on some doctored footage. Sure.

Anyway in the meantime check out this rather embarrassing claim of innocence below. Anyone think it’s weird that it’s on NBC? Are N Dubz and Tulisa big in the States?

â˜› More Dumb Stuff That People Try And Get Away With:

Looks Like Lost Prophets Singer Ian Watkins Is A Paedophile