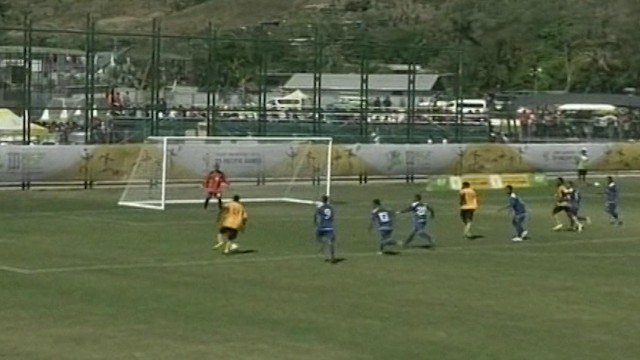 Now this is what you call a thrashing.

If you thought Japan were made to look like utter noobs against the USA in the Women’s World Cup Final the other night, spare a thought for Micronesia who got totally decimated by Vanuatu in an Olympic qualifying match and lost 46-0.

The match was so insane that the official scorekeeper just got up and left while it was still going on. The top scorer for Vanuatu — ranked 200 out of 209 in the FIFA world rankings, scored 16 goals.

Check out some highlights:

Obviously you can’t blame a 46-0 loss on just the goalkeeper, but my word is that goalkeeper shit. I mean no one expects Micronesia to win any games of football but come on, at least play like you don’t want your country completely emasculated in front of the world.

It's mayhem here. Scorerkeeper left his desk and now no one knows exact score. Vanuatu have at least 42. One guy scored 14 of them.

Haven’t seen that much incompetence in football since Japan’s hilarious binocular football attempts.