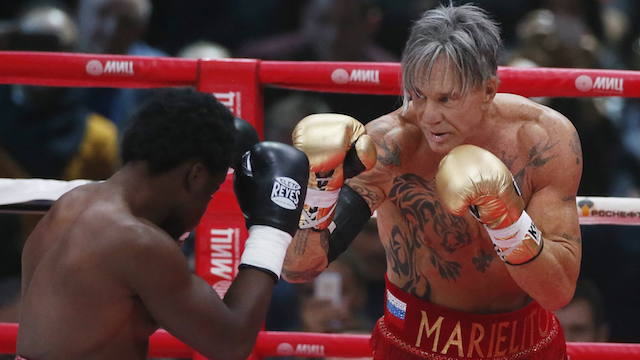 The old dog’s still got it.

Why are you so surprised? Mickey Rourke is the ever burning flame that just won’t go out, from one move to the next Rourke manages to find himself in some of the strangest places. Whether it’s on stage receiving an award for Best Actor at the Golden Globes, being nominated for worst actor at the Razzies or on the receiving end of a right hook, good old Mickey has done it all.

So it’s no surprise that during his recent break from acting Rourke has picked up his old past time, and somehow ‘profession’ as a pro boxer. It’s unbelievable to think that a man who had to have re-constructive surgery on his face to salvage it from the last time he boxed is doing it again. I know Hollywood’s a messed up place, but surely someone should have advised him that this time it was a bad idea?

Sadly for Rourke and the several thousand people that had to watch him fight again for approximately five minutes this was not actually the case, although the only reprieve they had was the suspect finish of the fight that came only two minutes into the second round. Thankfully this almost laughable excuse for an exhibition match lasted only a short amount of time, unlike the forever famous fight in Rocky 4 where Sly takes Drago fifteen rounds before ending his shit.

Now before I slate the presentation and viewing experience of the fight, let me just say that Mickey Rourke did manage to get himself into excellent shape for his bout – for a 62 year old actor Rourke puts a lot of us to shame. However that doesn’t detract from the hideous sideshow that sparks comparison to the Rocky Vs Drago fight; with its red and gold colour scheme, massive images of each fighter in the background and obviously the Russian commentators. There is an uncanny resemblance, but trust me when I say that it is not worth the five minutes of your life it will take to watch – instead use that valuable time to watch this car montage scene from Rocky 4.

If you do really want to watch the Mickey Rourke fight – and I do still strongly recommend you don’t – here it is. Don’t say I didn’t warn you.