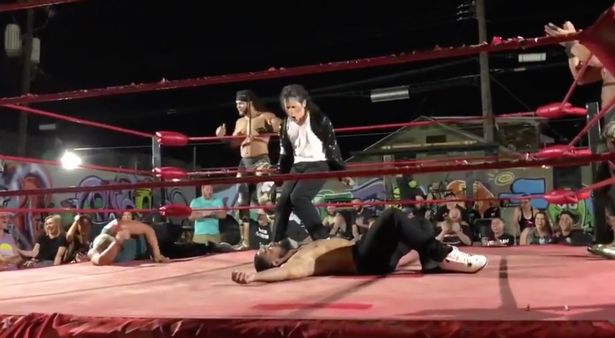 His finisher is better than the People’s Elbow.

Turns out Michael Jackson didn’t die back in 2009, instead he faked his death and fled to Brazil where he now wrestles with half-naked grownups (emphasis on grownups) for a living.

To be honest, the result is absolutely amazing. Get a load of this highlight reel:

How amazing was that moonwalk DDT? The Thriller elbow drop was pretty badass too. Although he does a much better version of it in the clip below where I think even The Rock would admit that it’s more electrifying than the People’s Elbow he used to do back in the day (at the 0:40 mark):

Absolute genius. It just works so well. Surely it’s only a matter of time before someone from the WWE steals those moves off him? Better yet get Vince McMahon on the line and sign this guy up ASAP.

To watch a man use a vicious Ric Flair chop during a real life fight, click HERE. Woooo!