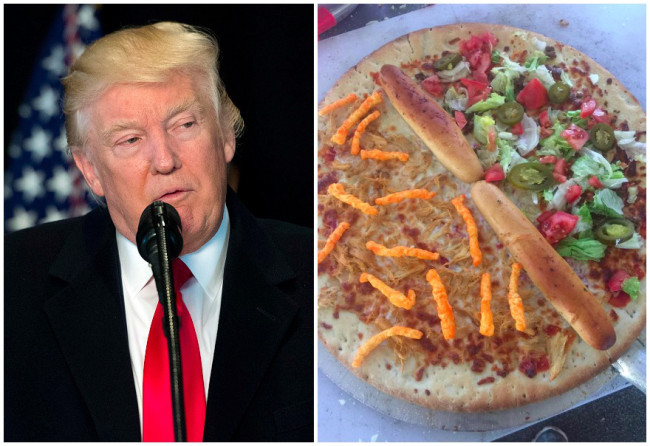 Which side are you eating?

It appears that not only has Donald Trump’s plans to build a wall between Mexico and the US divided opinion – it’s also divided pizza. A Texas restaurant recently created its own pizza pie recipe taking influence from the plans, even featuring a dough bread border.

Rob Jenkins, owner of Peace of Pizza, describes the creation as, “a Mexican taco pizza, separated by a white bread border” from “a chicken Cheetos pizza inspired by Trumps skin tone.” A+ for creativity there, although the pizza itself sounds minging. Cheetos on a pizza? And hot lettuce on the other side? No thanks.

It wasn’t meant to offend anyone. It wasn’t offensive in my opinion. I checked with a lot of people before we did it.

So naïve, Jenkins. It’s not possible to not offend someone on the internet these days. Although as usual, the people commenting about their ‘feelings’ towards the pizza just make themselves look like utter morons:

I reckon all the people who complained should pipe down. We’ve got far bigger things to worry about when it comes to Donald Trump.