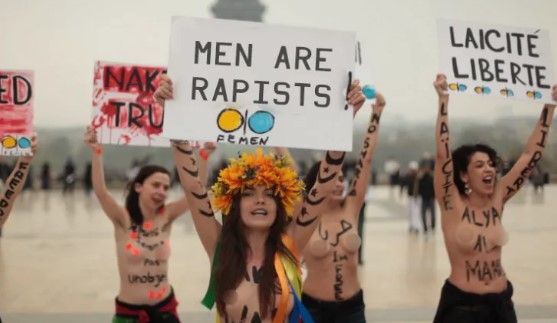 Sometimes you come across headlines on the internet that you think are just too ridiculous to be true. You see the headline and just think oh that must be a fake article from The Onion.

Occasionally though, these articles aren’t from The Onion, but rather from real journalists who are genuinely trying to make a sincere point. For example, this posted over at Refinery29 the other week:

The anti-woke, anti-women movement which Laur*nce F*x has appointed himself as a poster boy for is dangerous and shouldn’t be ignored. New for @Refinery29UK on how hostility towards women feeds into far-right ideas https://t.co/iiZJyycf4T

Refinery29 describes itself as “a modern woman’s destination for how to live a stylish, well-rounded life.” The writer here appears to have taken exception to actor Laurence Fox’s comments that he doesn’t date “woke” women, which is obviously a stance she’s entitled to (and the whole Laurence Fox saga is another story), but just check out some of the quotes from the article:

Did you hear that at the back, ladies? Laurence Fox — who you perhaps only knew as Billie Piper’s ex-husband because you’ve never seen Lewis (what?) — does not date “woke” women who he believes are being taught that they are “victims”, irrespective of whether they are right or not.

Not wanting to date “woke” women, far from being laughable, is actually one of the more insidious aspects of it. Spend an afternoon on any major dating app and you’ll come across (generally white) men saying openly sexist and misogynistic things. They might say “no psychos” or that they “fucking hate big eyebrows” in their bios. And, by and large, they also tend to hold extremely right-wing views and see themselves as victims of liberal thinking.

In fact, as I was writing this, a dear friend sent me a screenshot of a guy she’s just matched with who describes Jordan B Peterson as his “dream dinner guest”

Oh no, not Jordan Peterson!

I, meanwhile, recently had to block someone who after matching with me launched into a vile rant about how women are “evil”, “only want sex” and treat men as though they are “disposable”. When I asked him if he hated women he replied that he had “only moderate disdain” for us before asking me whether I didn’t want to date him because I’m actually “pretty rough”.

I wonder how she feels about the women who talk about men in this way?

All of this, of course, speaks not only to the presence of the very active online communities of anti-feminist incels but to the prevalence of the hideous and incorrect ideas they promote.

You just knew she was going to bring up ‘incels’ eventually didn’t you? The weirdest part though is the author of this article comes across like the female equivalent of an incel, and of course that’s all the fault of the men who won’t date woke women.

For more wokeness overload, get a load of The Guardian journalist who reckons the female-led Doctor Who is now more offensive than ever.