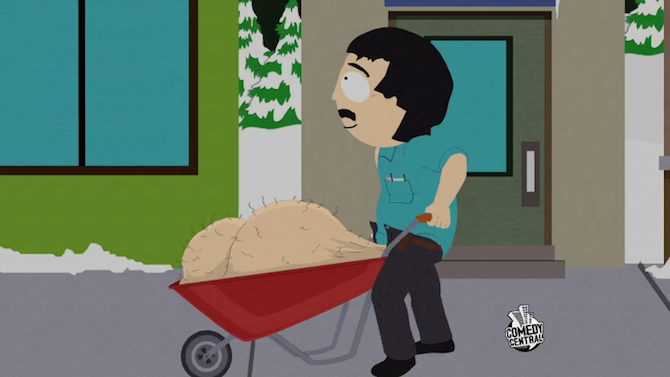 For the last few days the internet has been abuzz with the news that some guy in America has really large testicles due to a scrotal lymphoedema. Which has led to everyone who ever watched South Park to post this picture: 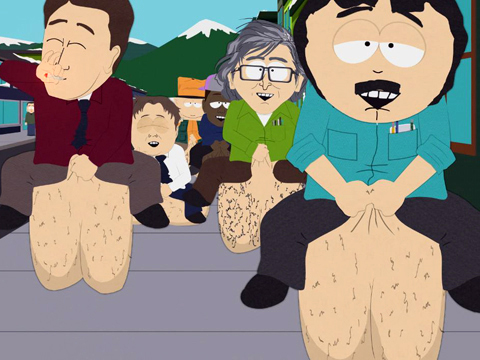 Whilst this issue has led me to think about one serious issue (the nadir of South Park’s ability to conjure up any jokes free from current affairs), it has also made me think about the problematic nature of healthcare in the U.S. I don’t have enough of an ego to think that I am the first person to think about this issue, nor that I am the most enabled individual to commentate on such a complex politically determined situation. What I have drawn from this is that many people have little to no idea as to why such an occurrence is even possible.

Read Next: Man With 10 Stone Testicles Disappointed With Surgery Results

The fact that many people have no idea why such a surgery would take so long shows that the emphasis on a deeper understanding of world events is gone.

#10stonetesticles Once your dick disappears you go to the doctors about it.. You don't wait 5 years!

What the fuck is this #10stonetesticles

So he couldn't wank for 5 years, that's why his test ovals were that long! #10stonetesticles

Why wait until your testicles are 10 stone to sort them out! #10stonetesticles

A simple excursion into U.S. health systems would tell you that the state will not pay for such procedures which means that anyone in poverty is unable to afford such life-changing operations. But why in a time when most news appears in the form of recycled twitter jokes would anyone bother to find out what is actually going on? Online media builds only a superficial understanding of modern issues and cannot convey the deep-seated dynamics at play. As access to information increases through these means genuine understanding is diluted, and the fact that opinions can now be voiced in mere seconds diminishes the likelihood – or even the need – to research stories and facts.

Social networking has changed the way that people interact with each other, but importantly not just on an interpersonal level. When news can be traded around a Wetherspoons table like a lighter there is no emphasis on individual development, this being replaced with a mob-consumption that creates a shared understanding of current affairs. A world where everyone has equal access to information is certainly better than the alternatives and should be cherished. However the pitfalls to this new order are still being discovered and social media in this instance has served to highlight a disturbing lack of understanding for a major world matter.

Of course this isn’t to say that social media is necessarily to the detriment of news consumption. One could equally argue that many people would have had absolutely no idea about some newsworthy stories were it not for Facebook and Twitter. Knowledge is no longer power by proxy, as anyone with a smart phone can find out about black holes, social reform in India or why Miley Cyrus is so pissed at her dad. The era of the pub debate is truly over. It is interesting though that this invention continues to simultaneously mold and affect the world it represents.

An article published last year by Messing and Westwood highlighted the various implications of news consumption in connection with social media use. The study found that if a news story is referenced via such a medium the individual in question is more likely to read through it even if the political loyalties do not match. This may just say that everyone is interested in other people’s’ business, and that by clicking a link they posted to their Facebook page we can actually hope to gain some ammo to spring on them later. Cynical perhaps, but then all social media serves this function to a large extent; the addition of other media allows the individual to be contextualised within society without having to even ask them their opinion. So even more interestingly the news, through its intrinsic links to different facets of society, can inform us about our friends. Without having to even click on the news article itself you can saddle up that high horse and condemn all of those people who read about Kim and Kanye’s ridiculously named baby.

The need to regulate such news is still an important matter to be decided. The aforementioned article recommends that social media sites approach this topic with care due to the current way in which advertising can be targeted through algorithms. The only problem with such a recommendation is that social media is self-regulating, as the users tend to decide what is fair and what isn’t, and most Facebook campaigns are outlandishly asinine threats to boycott the site for (insert reason here). It wouldn’t be so much as biting the hand that feeds but rather sending the hand back with some off-menu requests. Whether or not the service providers bother to take notice is their prerogative. For this reason it is at the behest of the a few individuals to decide what dictates good practice in terms of providing a gateway to news.

Ultimately the onus, as ever, is on the reader to be more than a blank canvas soaking up any news that happens to be floating through the ether. Only you can tell whether the news you’re reading is trustworthy and worthwhile, or just a load of balls.