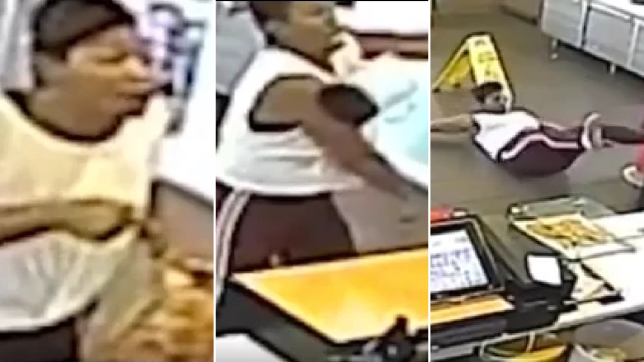 I’ve never had the joy of working in retail, but I can imagine that it’s pretty annoying sometimes when customers get all up in your grill about the dumbest things and there’s nothing you can do but just smile and apologise and hope they go away soon.

One worker wasn’t taking it any longer though over at the McDonald’s in Colerain Township, Ohio where a woman named Britany Price went up to complain after she ordered Happy Meals for her children and was given the wrong order. After being allegedly left unattended for 23 minutes, Price started to go a bit crazy and started throwing food at the manager of the franchise.

This caused the manager to snap and throw a blender in Price’s face, hitting her so hard that she fell backwards onto the floor and apparently messing her face up so much that she required surgery.  There’s a video of the incident below and a video below that of a news report from a month ago about it which is pretty funny as everyone is lying in it because there was no video of it at the time:

I mean lol? There’s surely no way that throwing a blender in someone’s faces can cause the injuries that Price is sporting in the second video. I don’t wanna call anyone a liar but I just can’t see how much damage can be caused by a blender there during that video. It doesn’t even look as though it hit that side of her face and looks like it hit her chest more?!

Of course, Price has now filed a civil suit against McDonald’s and is probably going to sue them for every penny they have given the dramatic extent of her injuries. I’m not saying it’s ambulance chasing culture but come on – surely’ there’s no way you could end up looking like that from what’s seen in the first video?

Not saying that the worker should be exonerated, just that it seems like Price is playing it for a payoff with the amount of press coverage she’s getting. McDonald’s workers unfortunately do need to learn to bite their tongues in these situations – or maybe just attend to customers better if she had been waiting for 23 minutes – but it is kinda cool sometimes to see belligerent customers get what they deserve.

Not sure this was that occasion though. Seems like the situation could have been resolved more peacefully, but if you’re gonna play with fire, you’re gonna get burned.

For more of the same, check out this McDonald’s worker beating the crap out of someone filling their water cup up with soda. Don’t do it kids.