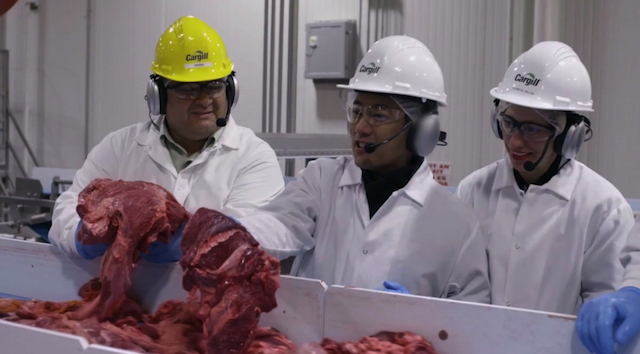 Finally, the truth is revealed.

The secrets of McDonald’s have long been untold – especially secrets like how the hell a burger can not decompose over a one year period – but as part of a new campaign called Our Food Your Questions they’re opening up their burger factories for inspection for the first time in their history.

However, just because you can see how the burgers are made in this video doesn’t mean that that was how they were always made. They confess that they did use that ‘pink goop’ that you’ve probably seen a picture of in the past in their burgers – but not in their chicken nuggets as has been alleged – but that this process ceased at least seven years ago and now is a lot more above board and 100% real beef. Still, it doesn’t really make me feel much better about all the double cheeseburgers I ate growing up.

They also admit that most of their cows are pumped with growth hormones, I guess that shouldn’t be such a big surprise though. They also reveal that they use a chemical known as azodicarbonamide in their buns and rolls and that this is also used in yoga mats, which is why their food is often accused of being rubbery. They dispute this though, offering the following explanation.

There are varied uses for azodicarbonamide, including in some non-food products, such as yoga mats. As a result, some people have suggested our food contains rubber or plastic, or that the ingredient is unsafe. It’s simply not the case.

Think of salt: the salt you use in your food at home is a variation of the salt you may use to de-ice your sidewalk. The same is true of ADA – it can be used in different ways.

So there you have it. To be honest I’m not really sure if this was a good idea because McDonalds burgers sound grosser than ever to me but hey, I’m not working in their marketing department so what do I know? Even with all the admissions though, the fact is the video is still made by McDonald’s so there’s probably a lot of stuff going on that they’ve kept out of it.  It probably explains why they’ve started serving gourmet burgers now though, huh?