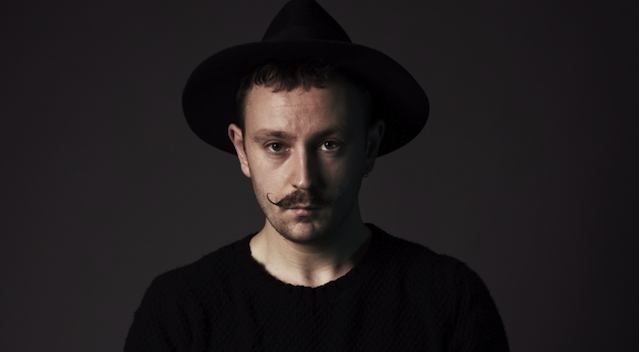 We talked to Maxwell about just why he was doing this, and he also let us see a video of the bloodletting process.

Maxwell Rushton hit us up last week to tell us about his new project, where he intends to use 8 pints of his own blood to physically turn himself into a logo. Obviously this was a fairly unusual concept so we were keen to talk to him about this to find out all about his motivations for the piece and the difficulties in its construction.

SC: Hi Maxwell, can you tell us a bit about the Buy In Bleed Out project?

MR: Sure, Buy In Bleed Out is a project that I started in 2011, like my other work it’s a response to the relationship  between society and the commercial industry. What separates it most is the physical and durational aspect.

Buy In Bleed Out is a piece in which I use 8 pints of my own blood (my entire human body equivalent) to physically turn myself into a logo by painting with my blood as a medium.

SC: How did you come up with the idea for the project?

MR: Years ago I began trying to create art that wasn’t influenced by anything commercial, but I became fascinated with commercialisation as a subject. So instead of trying to remove myself from logos, marketing and branding I embraced them. The project came about from wanting to sell myself out though an art work.

SC: What was your motivation for the project?

MR: I’m motivated to test the limits of commercial culture by blurring the gap between myself as a human being and as a product.

I don’t like my materialistic and sexual desires being controlled and I think marketing tries to do that. I think this piece will have mattered if it makes us more aware of how commercialism effects our lives.

SC: What logo will you be creating with the blood?

The logo is my own design as I don’t want to target a specific organisation. It was the first thing I made to deliberately sell myself out.

It’s a two part symbol that originally stemmed from simple mark making (four strokes) that I seem to have always drawn, painted, or scratched into surfaces throughout my life. To me they symbolise basic artistic expression that is without influence of any kind.

I transformed these marks into a logo to represent how we are shaped by being constantly immersed in commercialism.

SC: Do you worry that the blood might ‘go off’ over the time that you’re collecting it?

MR: No, the anticoagulent that is already within the bags keeps the blood from decaying.

SC: Where will the logo be displayed?

MR: I don’t know yet, watch this space…

â˜› More Blood: What Snake Venom Does To Blood 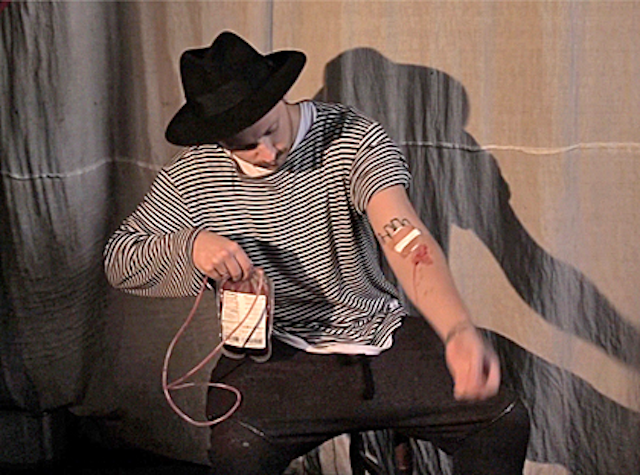 MR: Not really, I know that historically blood has been used as a medium for worship which is also why I’m using it to paint a logo, but apart from that I haven’t really explored it too much.

SC: How often do you have to blood-let, and how much blood gets taken every time?

MR: About a pint every three months.

SC: How long will it take you to complete the project from now, and how long has it taken overall?

MR: It’s a bit hit-and-miss but in a year and a half I’ll have obtained enough blood for the piece. I started bloodletting on the 18th of February 2013 so in total it will have taken the best part of three years. The initial plans for Buy In Bleed Out started way before that though.

SC: How did you manage to track down someone willing to agree to perform the bloodletting?

MR: This took a long time and a lot of emails, professionals wouldn’t touch the project because of their official positions and the laws on ethics. Eventually I found a fellow creative that was trained to do it, so I travel to his studio in Manchester and he helps with the letting.  However I’m at a stage now where I’m starting taking the blood myself.

SC: Are you OK with getting needles stuck in your arm all the time?

MR: It will be worth it.

SC: Does the bloodletting hurt? Do you feel weak immediately after doing it?

MR: Not really, putting a big needle in my veins can be a bit daunting, but after I’ve pulled the necessary facial expressions it’s fine. Used to it to be honest.

SC: What blood type are you?

I think using blood as a medium for art isn’t wasteful. I have donated before and I’ll donate after because that’s also worthwhile.

SC: What other projects have you been woking on recently?

MR: I’ve just finished a drawing that I’d been working on for 12 hours a day over the last 6 months. Perhaps it’s time for a watercolour.

You can check out a video of Maxwell bloodletting below, but it’s probably not for the squeamish. Credit to Howard Walsmsley for making the video. For more information about Maxwell and his projects, check out maxwellrushton.com.