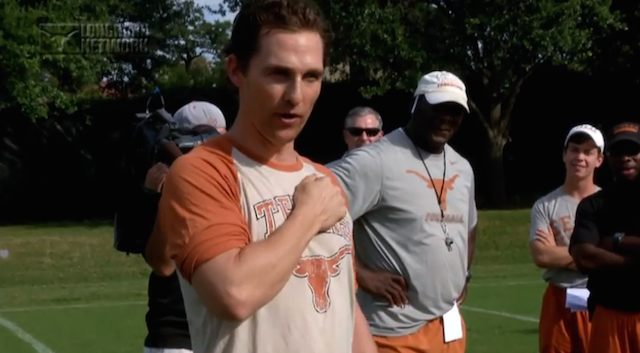 Anyone who’s been following movies or TV in the last year will realise by now that Matthew McConaughey is actually one hell of an actor and can deliver one hell of a speech. True Detective is all you need to know that, but if you’ve seen Wolf Of Wall Street and Dallas Buyer’s Club then you know even more of the story.

Turns out he can do it in real life too (although he’s probably acting here as well) as he showed up at a Texas football team called the Longhorns practice to give them an inspiring speech about why they play the game and what it means to them, alongside anecdotes from some of the movies he’s starred in. It really is rousing and inspiring and if you need to get pumped up about something today then I suggest taking 5 minutes out to watch it.

He even does the Wolf Of Wall Street chest bump – if you missed the remix of that then you need to check it out right now.