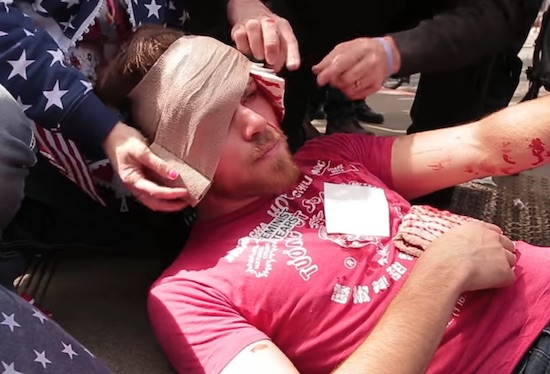 Donald Trump is hardly the most popular person on Sick Chirpse – or even the world for that matter in the current climate – but that doesn’t mean that if you support him I’m going to wish violence upon you. Unfortunately, that isn’t the case from everyone though.

In the video below, there’s some kind of political protest going on between Trump supporters and some other guys in masks (??) over in Berkeley, California. I’m not really sure what the actual issue is because of where the video cuts in, but there’s definitely some major beef between the two sets of supporters as they’re shouting and yelling at each other, and also all filming each other in case anything does kick off.

And it definitely does as one of these masked Antifa thugs comes out of nowhere and smashes a guy – who just seemed to be standing around trying to make sure people weren’t fighting – in the head with a U Lock before scampering back into the crowd. The results definitely aren’t pretty:

Ouch. That guy got truly taken out by that shot and it’s made even worse by the fact that he wasn’t even really doing anything.

Trump supporters might be morons in the most part, but even so the way to make a political point isn’t to go around beating them up with a mask on. That’s just cowardly and stupid and is going to do way more harm than good. I suppose that’s 2017 for you though.

For more Trump supporters, here’s one of them calling someone a cunt 100 times on the subway. Creative.