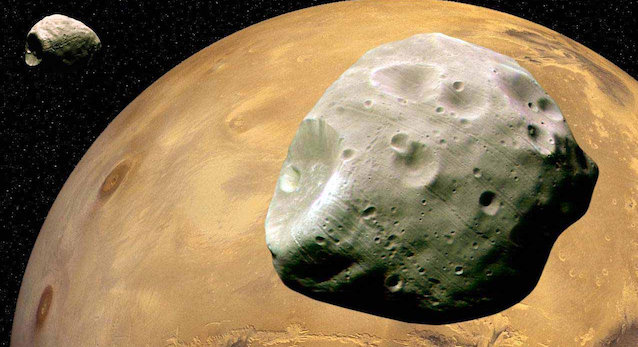 This is completely unprecedented footage and pretty cool. It’s pretty useful for science too.

In case you forgot, NASA sent a rover up to Mars a while ago to scan the planet for information and it looks like instead of drawing dicks on the surface of the planet for everyone to LOL at, it’s actually managed to finally uncover some information of value. Or at least something cool for us to watch rather than just to laugh at.

You might not know this but Mars has two moons and they’re called Deimos and Phobos. Phobos is the larger of the two and appears to orbiting closer and closer to the other whereas Deimos is way smaller and strangely seems to be orbiting further and further away from the planet. Rocket scientists have got no idea why this is the case all of a sudden but they’re hoping that the Mars Rover will shed some light on the situation.

Unfortunately it hasn’t yet but it did make this pretty cool video from a bunch of photographs the likes of which I don’t think has ever been seen before. I mean Earth doesn’t have two moons and I’m pretty sure we haven’t ever got a picture of another planet’s moons crossing orbits before have we? Pretty sure we haven’t.

So yeah, this is an unprecedented movie of the moon Phobos crossing the moon Deimos’s orbit and blotting it out for a couple of second before it re-emerges. It isn’t as mindblowing as the title suggests but hey it’s something that has never been seen before so you should probably just appreciate that. It will probably really help science out too and everyone loves science so that’s another big bonus.

What The Hell Has NASA Just Found On Mars?

Has A Lizard/Rat Just Been Discovered On Mars?