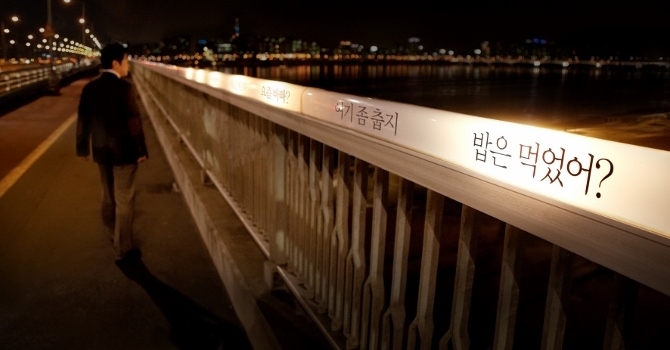 The Mapo Bridge in South Korea used to be a notorious suicide spot. Now, that’s changed thanks to an awesome and inspiring idea.

I dunno if you’ve ever been to South Korea but I know one guy who’s been there as part of his travels and he said it was a pretty cool place with a lotta things to do and see and he didn’t get bored at all during his time there. This is coming from a guy who would get bored if he was having a threesome with Zooey Deschanel and Mila Kunis so it was a broad statement, for him to say that. But, he showed me the photos from his time there and I had to agree that the place looks awesome and it was put on my To-Do List. I remember thinking that the prison – Seodaemun Prison – looked really eerie and spooky yet cool in a gnarly kind of way and a temple he visited – Seokbulsa Temple – looked like something you’d see in a film like Bond or Indiana Jones and I got pretty jealous that he’d been there and I hadn’t.

â˜› This Is A Cool Place, Too: Holland: The Ultimate Cool

One thing he mentioned to me, too, was that there’s a bridge called Mapo Bridge and it was notorious as a suicide spot. The number one suicide rate for OECD nations for eight years running belongs to South Korea and 1,090 suicides have been committed by jumping off a bridge into the River Han, the most ‘popular’ of these bridges being the Mapo Bridge. My mate said that the bridge itself, though, had been completely renovated and some inventor dudes had come up with a really awesome idea that was designed to make people realise their life is worth more than what they think and its aim was to put a stop, or to slow down, the suicide rate on Mapo Bridge.

The idea? Basically, a company called Cheil, who are based in South Korea, installed lights onto the side of the bridge adjacent to the pavement. These lights react to movement and have ultrasonic sensors embedded inside, so whenever someone walks past the lights, they light up and a message appears. These messages range from: ‘How are you?’, ‘What’s troubling you?’, ‘We’re always here for you,’ to photos of people smiling and generally having a good time/being happy. Since the lights were installed, the suicide rate on Mapo Bridge fell by 77% and it’s become one of the most popular places to visit in Seoul.