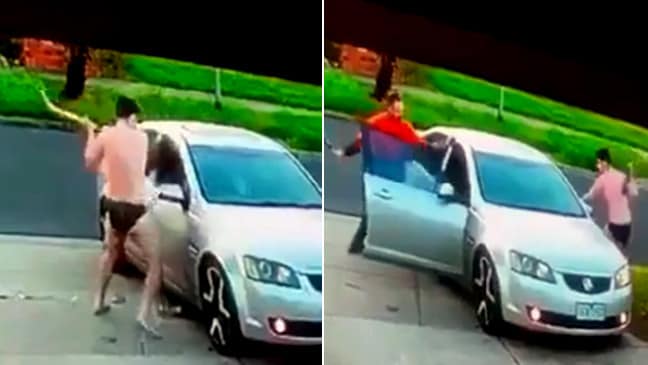 If you’re three crooks looking to pull off a home invasion, you’ve got to have it all planned out perfectly with a plan B, C and D in case shit goes completely wrong. Which is why these thieves over in Keilor, Australia suck so badly.

As reported by the Herald Sun, the thieves enter the home at 7am only to be confronted by an Aussie bloke in his undies and his mate who was only too happy to help out:

Just brilliant how the guy in only his underwear turns out to be the most dangerous, violent man in the video. Imagine the adrenaline as you grab a sledgehammer upon realising someone has broken into your home; the guy’s so pumped that he starts smashing up his own car to get to them. Gotta love the “bang” commentary as well as his mate smashes the sledgehammer into the thief’s back 4 seconds in.

Speaking of underwear, get a load of this guy going viral for giving his girlfriend brutal wedgies in public.