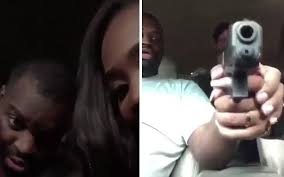 When will people learn?

You really would have thought that people would know that it’s not a good idea to mess around with a loaded gun all the time, but clearly they don’t as more and more stories of people accidentally shooting people with them seem to be cropping up all the time.

This time we’re in Houston, Texas where 26 year old father of two Devyn Holmes was in a car parked in the back of a petrol station when his friends decided to start streaming themselves on Facebook Live. No idea what they were hoping to achieve by doing that, because it seems like all they were really doing was shouting at each other and waving a gun around, but maybe some people think that’s what their Facebook friends want to see them doing.

Anyway, 25 year old Cassandra Damper was waving the gun around loads and pointing it at Devyn, even to the point where he asked her to stop doing it because it was making him nervous. She probably should have listened to him, because moments later she ended up shooting him in the face with it by accident:

Damn, that kinda looks fake the way the gun doesn’t make a sound and then he suddenly gets shot, but I can assure that it’s actually real and goddamn grim.

Holmes is currently fighting for his life in hospital after the incident and Damper has been arrested an charged. She’s also been accused of tampering with evidence as it’s alleged she tried to wipe the gun residue off her hand.

She’s claiming that she didn’t know the gun was loaded but it sounds fairly clear in the video that she put a clip in just before she ended up shooting him? Not 100% sure on that but I doubt she’s got much of a leg to stand on when the video is right there in black and white showing what she did. Good luck in the slammer babes.

For more people screwing themselves up, check out these selfies that were taken moments before death. Dangerous.