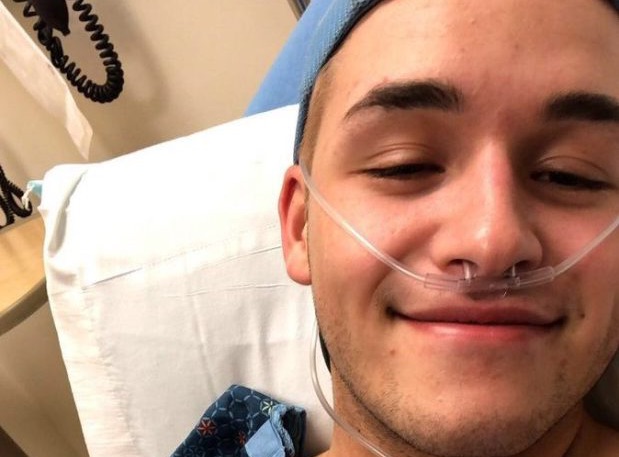 Don’t bite off more than you can chew.

I’ve never given anyone a blow job and I don’t think I ever will, but I often wonder how women (or men) are able to put huge dicks into their mouths without any repercussions – other than them spunking, obviously/hopefully.

Turns out there are people out there who regularly get injured from taking on more than they can handle though and one of those who decided to share his tale is a guy called Fredy Alanis who ended up rupturing an airway after chowing down on a ten inch penis. He was reluctant to initially tell doctors at the hospital how he had obtained the injury as his mother – who knows he’s gay – had accompanied him there and he was a bit embarrassed but he eventually came clean before posting the following on Twitter:

Excuse the bad angle but remember when I sucked a hulk sized dick and ended up in the ER afterwards LMFAO never forget pic.twitter.com/dvaEITTcVs

That’s a whole lot of popularity for that tweet eh? I guess you gotta laugh at these kinda situations though haven’t you, and it seems great that Fredy could see the funny side to it as well. Here’s what he had to say following his treatment:

I managed to get him to climax despite the fact I was overwhelmed but I started coughing violently afterwards and went to hospital.

Eventually, I had to tell the doctors exactly what happened to be treated the right way.

The fact that it happened is insane because the doctor told me getting the airway ruptured through oral intercourse is one in millions, maybe hundred millions.

I told my causal partner what happened and since then when we decide to hook up or whatever he is a lot less rough. He’s more cautious and aware of what he’s doing.

All’s well that ends well I suppose and that’s great of Fredy’s lover to be more considerate with his penis in the future. An example for everyone.

For more blow jobs, check out this paralysed man telling the story about when a nurse gave him a blow job. Heartwarming.