What do a lot of people do when their car gets messed with? That’s right, leave an angry note under the wiper — does it work? Does it fuck.

That’s perhaps why Reddit user mfiasco might have just revolutionised the way we deal with people that are pissing us off by leaving an incredibly polite (and sarcastic) note to the thieves that kept jacking his car. 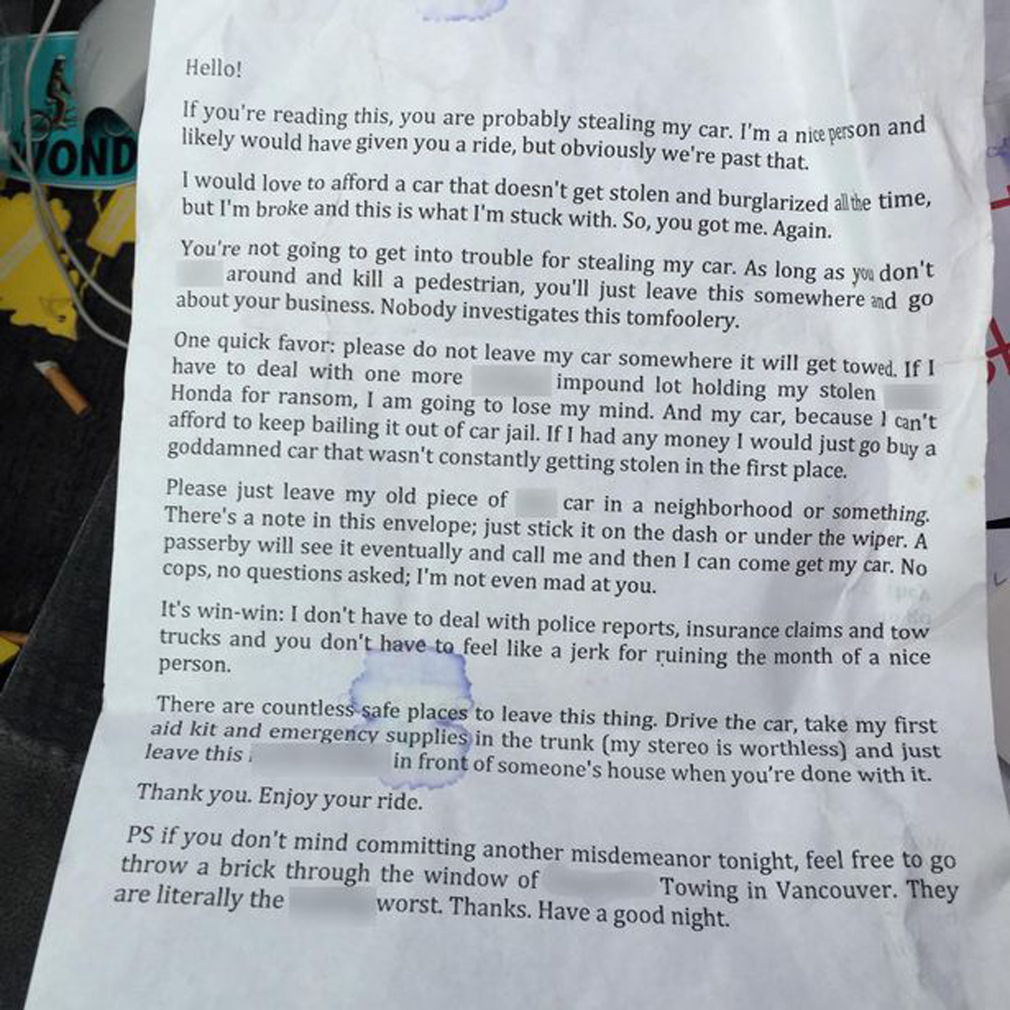 If you couldn’t read the note, here’s what it said:

If you’re reading this, you are probably stealing my car. I’m a nice person and likely would you have given you a ride, but obviously we’re past that.

I would love to afford a car that doesn’t get stolen and burglarised all the time, but I’m broke and this is what I’m stuck with. So, you got me. Again.

You’re not going to get into trouble for stealing my car. As long as you don’t fuck around and a kill a pedestrian, you’ll just leave this somewhere and go about your business. Nobody investigates this tomfoolery.

One quick favour: please do not leave my car somewhere if it will get towed. If I have to deal with one more fucking impound lot holding my stolen shitty Honda for ransom, I am going to lose my mind.

And my car, because I can’t afford to keep bailing it out of car jail. If I had any money I would just go buy a godamned car that wasn’t constantly getting stolen in the first place.

Please just leave my old piece of shit car in a neighbourhood or something. There’s a note in this envelope; just stick it on the dash or under the wiper. A passerby will see it eventually and call me and then I can come and get my car. No cops, no questions asked; I’m not even mad at you.

It’s a win-win: I don’t have to deal with police reports, insurance claims and tow trucks and you don’t have to feel like a jerk for ruining the month of a nice person.

There are countless places to leave this thing. Drive the car, take my first aid kit and emergency supplies in the trunk (my stereo is worthless) and just leave this in front of someone’s house when you’re done with it.

Thank you. Enjoy your ride.

You can really feel how fed up he is at having to constantly bail out or buy a new car and even more so because of how skint he is.

Anyway, the note didn’t go unnoticed — this time, although they did take the Honda, they parked it in front of a nearby house. Mfiasco was pretty happy about it as he said:

They read my letter and I think it worked; they ditched it in front of a house this time (YAY).

So it sort of worked — in his words, they’ve set up a bit of a ‘win win’ situation.

Although personally, I wouldn’t carry on stealing that guy’s car. He seems cool and also a little bit hard up. Maybe if those guys keep jacking it they will get their comeuppance like this guy did.