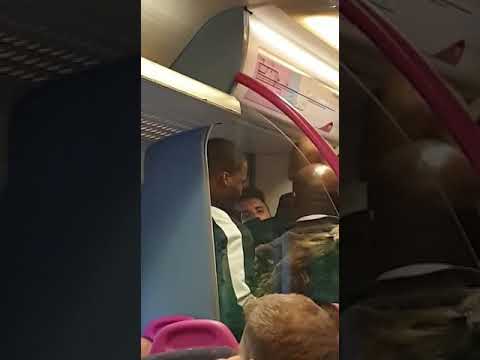 It all kicked off on a C2C train travelling from London to Southend-on-sea this week following an argument between two commuters over a seat.

A witness told The Sun that the row was sparked after the shorter gentleman tried to sit on the back of two chairs:

He was literally sitting on people’s heads.

A commuter who was on the seat took offence, rightly so.

They had words, it turned into a fight. The fight got broken up and the guy was taken to the doors to calm down.

He was mental – shouting and swearing at the guy who was holding him.

The guy holding him had enough and gave him a lovely head butt. It sounded painful. But the guy was a nutter.

The THUD his head makes is jarring 😱😱 I’m not so sure that tall dude isn’t a robot. That was the most robotic move I’ve ever seen in a fight. pic.twitter.com/ZlPDQ9bh22

Ouch. I don’t think he could’ve landed a more perfect connection with that headbutt if he tried. I know it took 30+ seconds watching that video for the action to start but luckily the wait was worth it. What a headbutt!

The maddest part is how everyone else on the carriage just starts cracking up at this guy whose just had his brains scrambled. Possibly because, like the witness said, the other guy was a huge dick. But also probably out of pure fear of that guy’s headbutt.

To watch a Glasgow woman TKO a man for chatting up another woman (also via headbutt), click HERE.