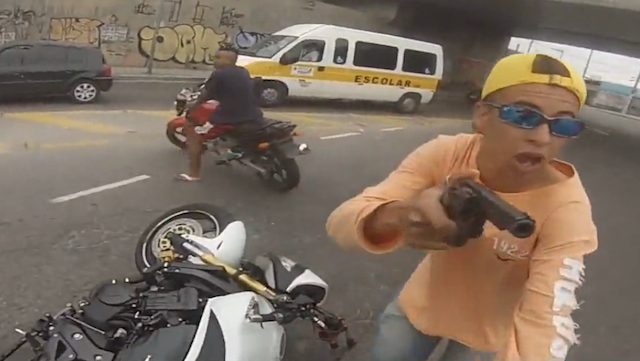 Obviously if you don’t want to see a video of a man getting shot then you probably shouldn’t watch this video.

This is another great advert from Brazil’s tourism board for everyone thinking of heading over there for the World Cup next summer. This time it’s a man getting hijacked at gunpoint as he rides his motorbike around Sao Paulo. The thief doesn’t get away with it though, as a policeman arrives at the scene out of nowhere and sticks two lumps of lead in him.

The video itself is about 8 minutes long but all the good stuff happens towards the beginning in the first minute and the rest of it is just a bunch of people standing around talking and getting police statements while they wait for an ambulance to arrive and pick the thief up. There is a cool bit where the guy getting robbed shouts at the thief as he lies on the floor bleeding out.

Some Redditors managed to translate their conversation and apparently it sounds a bit like this:

‘Victim: Now you’re gonna rob in hell you son of a bitch.

Robber (whining): I got shot!

Victim (pissed off): You go fuck yourself! You’re the one pointing gun at other people’s face!

Victim: You sure will! You should have already! Son of a bitch.

Robber: (inaudible, apparently asks someone to get him something to drink).

The incident was caught on camera because the dude riding the motorbike – who is apparently YouTube user Anderson Mangai – had a GoPro camera attached to his helmet while he was driving through the city. As any regular reader of Sick Chirpse probably knows, road users in countries like Brazil and Russia regularly use these kinds of cameras to ensure that any disputes they may have with other road users can be settled based on video evidence, rather than a sustained legal battle based on all the he says she says bullshit.

What’s most disturbing about the video is the fact that nobody else in the area really acts like what’s going down is a big deal at all, in fact nobody seems to even notice whereas if that kind of thing happened over here everyone would be going crazy over it. Just another day in Brazil I guess: