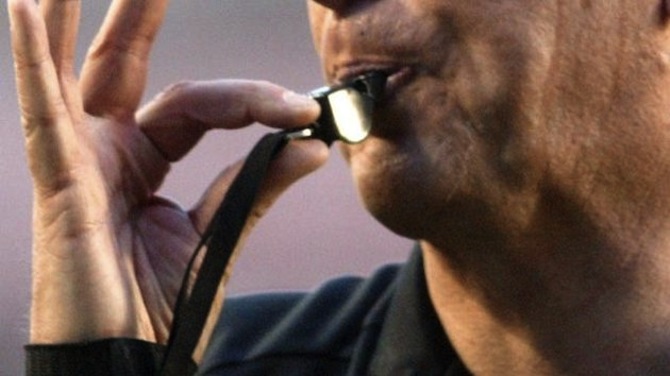 In England, if the referee makes a bad call we call him a wanker. In Brazil, the referee stabs a player and then gets decapitated by the fans. Tomato, tomato.

Yeah, you did read that headline correctly. Pretty messed up, right? I was thinking of going to Brazil for the World Cup next year but between this and all of the riots that were going on during the Confederations Cup and all the pleas of Brazilian people asking people from other countries not to come, I’m not so sure. I still kinda wanna go though but this is probably one of the most shocking stories I’ve ever heard. It’s like something out of the Wicker Man or something.

Basically, up in the Maranhao region in north east Brazil (maybe I’ll just avoid this area if I head to the World Cup) there was some amateur football match going on between two teams from a city called Pio Xii. During the match, a 30 year old player called Josenir Dos Santos Abreu approached the 20 year old referee – whose name was Otavio Jordao De Silva – to argue about one of his decisions. Apparently Abreu threw a punch at De Silve who retaliated by stabbing him in the stomach with a knife that he had been carrying with him the whole match.

WTF? I mean aside from the fact it’s completely screwed up that he felt the need to carry a knife around with him during the game, it must have made it kind of hard to run around refereeing too right? And it’s pretty fucking messed up that he stabbed a player in the stomach with it right? It’s a game FFS, you know? Brazil man, that place seems like it’s almost as screwed up as Russia. Things got even more screwed up after that though. And in like a seriously, seriously screwed up.

Abreu was rushed to hospital but died from his wounds en route. That’s screwed up sure, but the fan reaction was completely and utterly one of the most screwed up things I have ever heard or read about ever. Outraged by the fact that the referee had stabbed one of their players (in fairness that is pretty outrageous), they attacked De Silva and lynched him. They then beat the shit out of him, stoned him, then quartered him, before finally decapitating him.

Um? Kinda speechless on this one except to say that this shit is completely fucked up and shouldn’t be happening anywhere in sport or anywhere period. I mean what the hell? Someone pissed you off so you just decide to decapitate them!? What planet are these guys on? I mean I’ve seen City Of God but come on right?

At the moment police have arrested one suspect – a 27 year old dude called Luiz Moraes De Souza, who admits assaulting the referee but denies killing him – and are looking for two more, as there’s apparently Smartphone footage of the incident which clearly identifies them. I wouldn’t want to be the guy looking through that.

That video hasn’t hit the internet yet, but there is one of De Silva’s body getting reassembled in the hospital afterwards which you can find HERE if the mood takes you. I wouldn’t recommend watching it under any circumstances though because it’s really gruesome and gross. Don’t say I didn’t warn you.

Bestgore.com – The Most Screwed Up Website You Will Ever Visit

What’s The Most Fucked Up Thing You Ever Saw As A Kid?