After thirty six years of never having a girlfriend, this guy decided to take matters into his own hands. Literally.

Over in Williamsburg New York, a guy named Adam Carolla came up with a unique way to solve the problem of not being able to find a girlfriend in his thirty-six years of life. Talking to Gender Studies Journal, he explained that he has virtually zero prospects of ever finding one:

I have Tourette’s syndrome which causes me to constantly shout words that are derogatory to women.

Cunt, slut, bitch and whorebag seem to be my favorites. It doesn’t exactly attract women. I’ve tried medication, etc, to control my outbursts, but it hasn’t helped.

Carolla tried hiring a prostitute for female companionship, but couldn’t go through with it:

There’s just something about paying for sex that doesn’t sit morally correct with me.

Plus I want to be close to a woman and, if I’m paying, there is zero intimacy.

I want a woman whose breasts I can fondle and have her really enjoy it. I’m a breast man.

And Carolla certainly proved he is a breast man when he took the radical last step of paying a New York City plastic surgeon to give him size D female breast implants:

I wanted a pair of really big boobs I could play with, lick, just enjoy and I thought why not put them on myself?

It took me a long time to make the decision, but it has been an absolute joy.

Sure it’s not the perfect substitute for a real woman’s breasts, but I’m extremely happy with my choice. 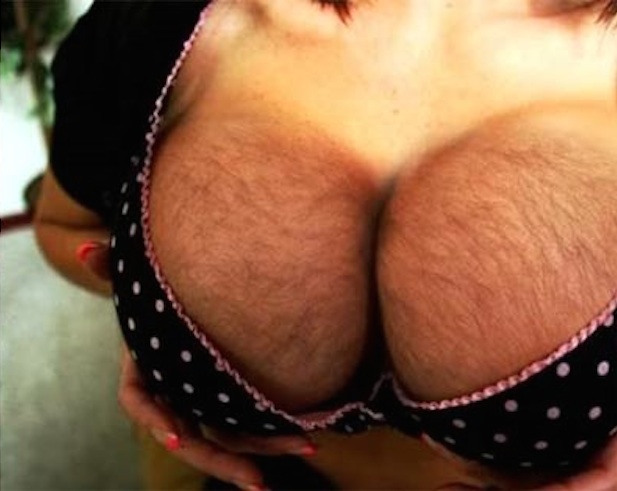 But how does walking around with D cup boobs affect Carolla’s normal life?

My parents were a little weirded out when I first started coming home for the holidays with my new rack.

My mother gave me a lot of her old bras she was no longer using.

Also, it’s probably not funny, but I’ve caught my dad on numerous occasions staring at my breasts. I’ve thought about just pulling up my shirt, removing my bra and saying, ‘Okay, Dad. You’ve got two minutes. Have at them!’

Carolla works from home in the securities industry, so he rarely leaves his apartment, but he is beginning to talk about his breast implants:

The reason why I’m starting to come out a bit is that I think I can help other men who are having trouble finding real women. They need to realize surgical solutions are available.

They can get breast implants or even get a full sex change so they can, basically, become their own girlfriends. I’ve thought about getting a vagina too, but that’s on the back-back burner for now.

Having large firm breasts on my own chest is enough for now. I’m happier than I’ve ever been.

We’re truly living in unique times. I’m happy that Adam found happiness, but let’s hope he doesn’t get too extreme and try to emulate the woman with the largest fake boobs in the world anytime soon though.