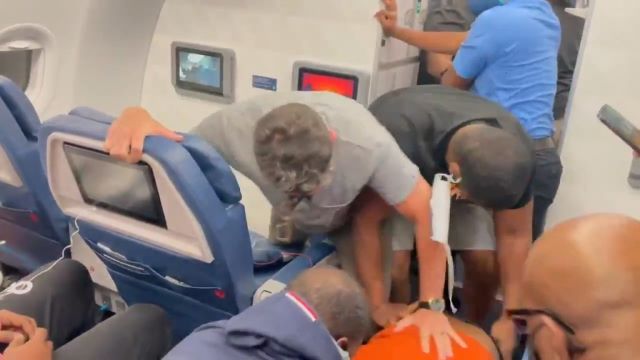 Ever since air travel opened up to something resembling the pre-pandemic days, it would appear most people have completely forgotten how to behave like civilised human beings in airports and on flights, especially if all the recent airport fight videos are anything to go by.

Well over on a Delta Airlines flight from Los Angeles to Atlanta the other day, one passenger allegedly passed a note to the flight crew claiming the man sat next to him was a terrorist, then made an announcement to his fellow passengers that they should prepare their oxygen masks before literally trying to open the plane door mid-flight and jump out.

Update: he was trying to open the door to the outside, not the cockpit.

I’m never sure why a plane can’t just continue to its destination after the crazy person is restrained, but I guess that’s just protocol these days. Also I’m pretty sure a plane door can’t just be opened like that mid-flight, but it must still be pretty alarming to watch someone try. How far were these “strong men” allowed to go anyway? Could they have choked the guy out? Punched him in the face? Whatever it takes to get the situation under control I imagine. Good thing there were a few people on board ready to act and not just whip out their smartphones.

P.S. I just have to include this reply to the witness account above…

Why did they have to bring gender into it? Couldn’t a strong woman or non-binary person help?!