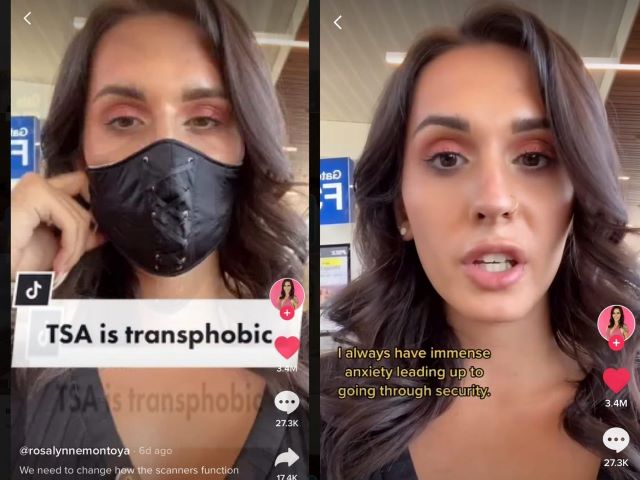 I’d never thought about this before, but it turns out transgender people run into unique problems when going through airport security scanners, given the machines have male and female settings.

Transgender model Rosalynne Montoya experienced this firsthand the other day; describing how, as a chick with a dick, the airport scanner couldn’t quite figure out what the ‘anomaly’ was between her legs:

Welp, I guess she should take that as a compliment? She looks so convincing as a female that even the TSA agents couldn’t figure what the issue was until she told them.

Naturally we all hate TSA for our own reasons but I don’t know that it’s fair to call them ‘transphobic’ over this, as obviously the machines picked up a feminine face and a pair of boobs and then a male body part between the legs and couldn’t figure out WTF was going on. Might it have been a good idea to tuck the goods between her legs, Buffalo Bill style?

Anyway, not sure why these machines need to be gendered in the first place. Don’t they just work as sort of metal detectors? Or am I missing something? I don’t know, but apparently TSA HQ has reached out to Rosalynne and will be discussing the incident with her/begging her to stop calling them transphobic on TikTok. Watch this space.

For the crazy rumour that Everton’s James Rodriguez is quitting Premier League football to become a transgender woman, click HERE. Surely not?