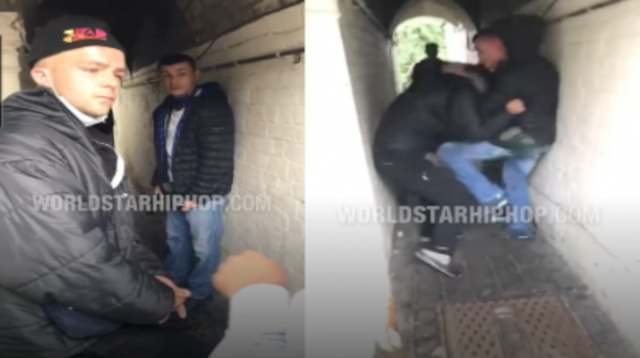 That’s one way of dealing with it.

The most responsible way of dealing with carjackers is probably to call the police and let them deal with it, but the man in the clip below came up with something a bit more unconventional and entertaining – insisting the carjackers fight each other.

Given the alternative was that they’d both get beaten up by the man and his friends, there was only really one option…

There we go – everyone’s happy! Obviously it’s not nice to see this sort of thing go down but it was pretty amusing how the first guy didn’t even finish listening to the rules before launching an all-out assault on his buddy. He didn’t hesitate one bit. Just swung on him the moment he heard the suggestion.

All in all, better than going to jail and/or getting beaten up by a crew of people, and all they had to do was playfight for a few seconds. Although I guess there’s also the added humiliation of having this video go viral and stay on the internet forever. Would’ve been pretty funny if they still called the police on them afterwards though.

To watch the sneakiest car theft of all time take place at a petrol station in New Orleans, click HERE. You almost have to respect it.