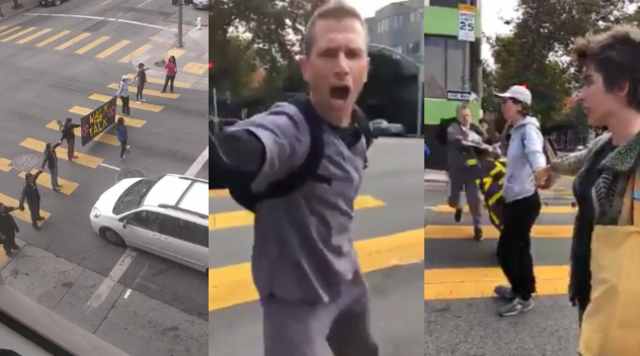 It looks like regular people all around the world have had enough of climate change protesters blocking roads and public transport, and since the police don’t seem to be doing much about it, some citizens have been taking matters into their own hands.

We all saw what happened at Canning Town station last Friday, and well it looks like it’s a similar situation over in the US:

A citizen had to take matters into his own hands here. Where the hell are the police? Why don’t they immediately arrest these people? Why would you let them block the road for even 10 seconds?

And an overhead angle:

Hah. This is so good dude, I’m so glad to see the view from below. pic.twitter.com/XuMavivG4q

You know things are bad when healthcare workers are losing their heads like this, but then that’s the sort of situation these annoying activist types are creating. What if that guy was a surgeon on his way to perform open heart surgery? People could be literally dying in hospital waiting for a doctor who can’t make it there because some morons think blocking traffic is the best way to protest climate change.

It’s not just him either – for the man who was so determined to get a burger that he barged a crowd of climate change protesters out of his way, click HERE.