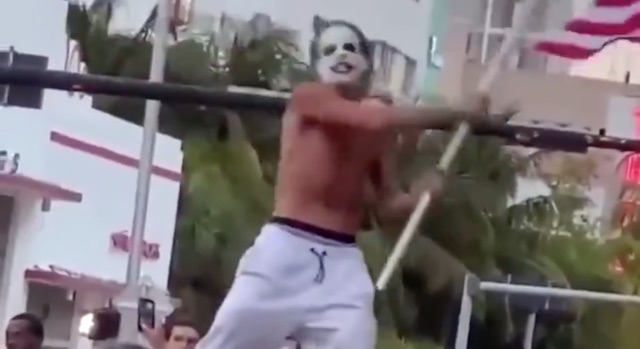 We posted last week about how everyone was going absolutely mental in Miami for Spring Break and how it was causing a major problem with the police and they were beating people up and arresting them to try and halt the spread of the virus and this week we’re seeing some idiot dress up as Joker and jump on cars and throw money around down there.

You can see a video of that below, but it seems as though Miami has pretty much descended into chaos after a 9pm curfew was imposed over the weekend and everyone failed to follow it again and just kept on partying all the time. I suppose it’s good to know that some people out there are as big idiots was we are over here.

Anyway, here’s that quite frankly scary video of Joker. Not sure if it’s worrying or hilarious that he shouts ‘Covid is over’ as he’s jumping around:

Paints face and hair like the Joker, goes to South Beach, climbs up on a car with an American flag, screams “Fucking COVID is over baby!” and makes it rain. #BecauseMiami pic.twitter.com/JTLEjzCZps

Yeah that is kind of funny isn’t it, but mainly because everyone in the crowd doesn’t even seem remotely interested in what he’s saying or doing. Imagine going to all that effort and trying to rile up the crowd and then for none of them to care even slightly. Must be kinda upsetting, but I imagine this guy still carried his flag around and partied pretty hard for the rest of the night in Miami. Just seems like that kind of person.

For more of the same, check out this guy dressed as the Joker who is running for governor in Japan. Think he’ll get in?