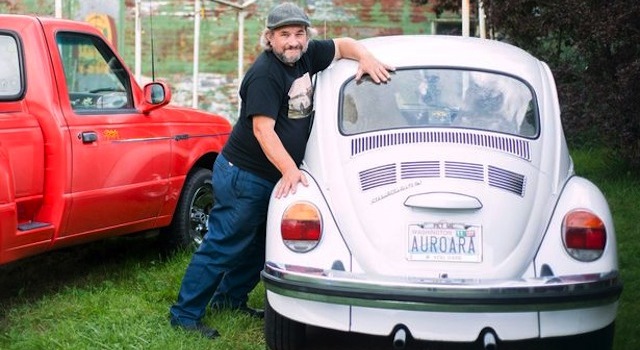 63-year-old Edward Smith, a life-long mechaphile, decides to settle down with a Volkswagen Beetle after 1000 other mechanical sexual partners.

There comes a time in every man’s life where he decides that having sex with 1000 cars does not give him the emotional fulfilment he so desires. This is what Edward Smith, 63, realised after giving up his lothario ways and committing to his one true love; Vanilla, a Volkswagen Beetle. Sure, he had his fun; by his own estimate he’s given over 1000 cars a good rogering over the past 48 years. But Vanilla’s seductive alabaster exterior and voluptuous curves blew away all of the competition.

As Smith described in an interview with Barcroft TV;

“When I hold Vanilla in my arms, there’s a powerful energy that comes from her in response to that…if anything was to happen to her I would be more than heartbroken.”

However, this gas guzzling Casanova plays fast and loose with the word commitment, admitting he still has the (literally) odd fling with a 1973 Opel GT named “Cinnamon,” and an 1993 Ford Ranger by the name of “Splash”.

â˜› Read Next: Swansea Thief Gets Trapped in Stolen Car

Smith claims to have been a mechaphile since the age of thirteen when he first laid eyes (and penis, no doubt) on the famous Corvette Stingray. A mechaphile is someone who has a sexual attraction to machines and can include bikes, helicopters, planes and cars. Perhaps due to the controversial nature of this paraphilia, little is know about it and mechaphiles can be hard (LOL) to come across. However, Smith insists that he is part of a forum for mechaphiles which has at least 500 members.

Watching the video of Smith gently caressing and nuzzling Vanilla makes for extremely uncomfortable viewing (and let’s face it, watching a 63-year old man making love to anything is pretty uncomfortable viewing), but you can’t help but be struck by the fact that he seems quite a sweet old chap who has  genuine warm affection for his violated car. As his neighbour points out, his being a mechaphile  is not hurting anyone.

So is this something we should learn to tolerate and embrace as a society? Or is it an obscenity which ought to be illegal as it is in many countries?

â˜› Check This Out Next: German Police Seize Car With Bizarre Feature