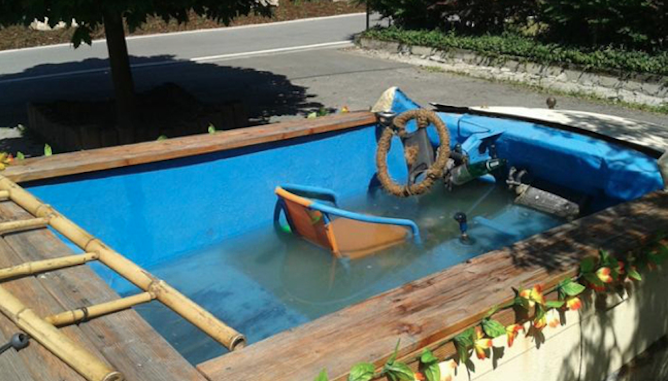 German police have seized a car with a strange feature, a pool. Possibly the most interesting way to keep cool in the summer we’ve seen so far.

As you may have noticed, the weather’s been pretty hot recently. With this change in the usual climate, people are trying to find new ways to stay cool. Maybe when you’re next sat sweating in your vehicle you’ll think to take a leaf out of these German guys and join the carpool (possibly the worst pun I’ve ever made).

The police were left stunned when they saw the modified automobile, with one of the police officers describing it as the “strangest looking convertible” he’d ever seen. The driver and his three passengers were spotted splashing around as they passed the confused constabulary. Once the men realised they were being followed they decided to make a get away by jumping into a nearby river. The drunk driver was later caught, when he attempted to collect his clothes.

The car was like something you’d see on a DIY version of Pimp My Ride. The convertible BMW may have been lacking in registration plates, but what it did have was much more impressive.  They had bordered around the opening with wooden boards and fake plastic flowers, you know so it got that real jacuzzi feel. The most exciting feature was the water, of which the car was full of.

The driver has apparently been arrested due to drunk driving and the Chemnitz police spokesman Frank Fischer said they could get in further trouble as the car probably didn’t have a road permit.

Prosecutors are currently looking to see if there’s actually anything in the law about driving a pool. If not then these men have created a legacy and have proved themselves to be some true competition for the Top Gear boys. 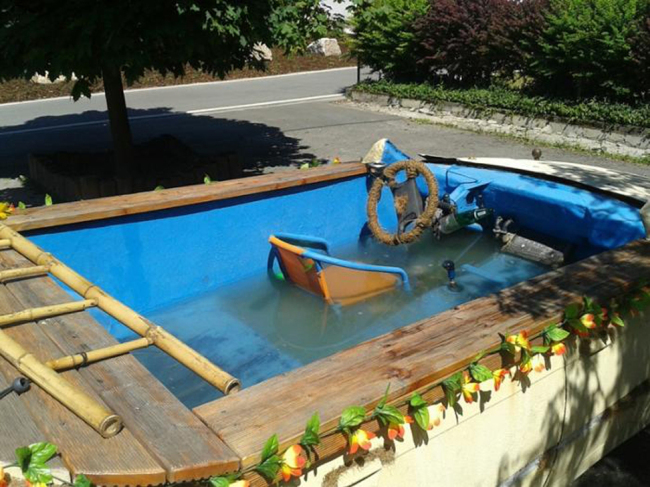