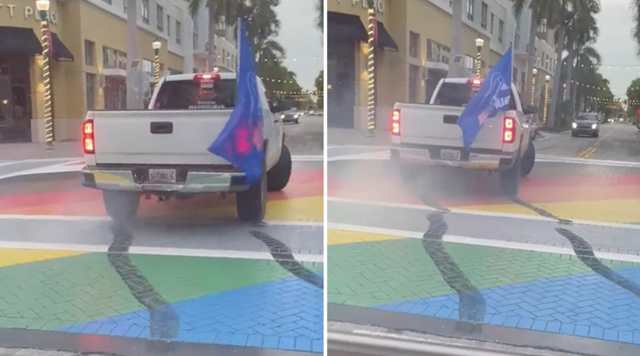 A Miami man who appears to have purposely damaged a new LGBTQ pride crosswalk in Delray Beach has been arrested, reports CBS News.

Alexander Jerich, 20, turned himself in to police after the footage went viral and has now been charged with criminal mischief, reckless driving, and a felony enhancement for evidence of prejudice.

This is a deliberate act of violence against the LGBTQ community.

We’ve made such progress here in the last 30 years on LGBTQ issues. To see someone do something like this took me by surprise.

There’s some debate over whether this guy should be charged with a hate crime for what would otherwise just be a criminal mischief/traffic offence, but I mean he is quite deliberately trying to vandalise the rainbow crosswalk. Should that necessarily be more punishable than vandalising a regular crosswalk? It’s a complicated one for sure.

One thing I can’t wrap my head around is that this LGBTQ Pride crosswalk apparently cost $16,000! How? How is that possible? Maybe that’s the real reason they want to punish this guy. Best of luck to the lad for when he winds up in prison and is asked what he’s in for. Street cred = zero.

Meanwhile, the main actor from ‘Love, Victor’ has been receiving death threats for playing a gay guy on film. Can’t everyone just calm down a little bit?