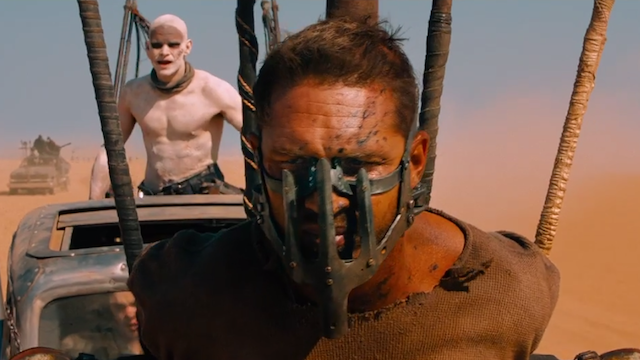 We showed you some pictures from Mad Max Fury Road over a year ago but haven’t heard anything from it since, so I’m sure most people just assumed that it had run into more production problems and was probably never going to come out. In case you’re unfamiliar with the story behind the movie, it’s actually been in production hell for around 30 years and it’s a miracle that it’s even being made basically.

This wasn’t the case though, and it looks like it’s finally set for release next year and if this trailer is anything to go by then it’s definitely going to be worth the wait. It’s basically looks like a post apocalyptic version of Fast And The Furious, with loads of terrifying looking vehicles racing and battering the crap out of each other, and Mad Max himself (unfortunately not Mel Gibson but Tom Hardy now, probably because of that whole hating on Jews thing or when he went crazy over a script not being delivered on time) being towed around by them in cages and by a rope and generally getting the absolute crap kicked out of him.

I normally can’t get that excited about big blockbuster movies like this, but they really have gone a cut above with this trailer and I’ve already watched it about three times. It’s just a shame it’s not coming out for almost another year. Mark May 15th 2015 in your diaries.