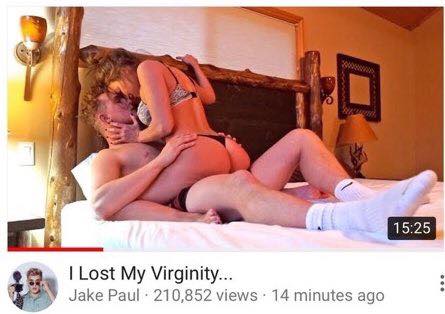 The quest for views continues.

I had never heard of Jake or Logan Paul until about a week ago and having sat through the video below I wish that I never had.

Of course, Logan Paul burst into the mainstream consciousness this week after he went to a Japanese suicide forest and filmed a dead body hanging from a tree in order to boost his views. Of course this succeeded but in an overwhelmingly negative fashion as almost every mainstream news outlet launched scathing putdowns of his actions, and rightly so.

Whilst Logan might have gone quiet, his brother Jake – who is arguably an even more famous YouTuber with 12 million subscribers – decided that he needed to come up with an even more outrageous/despicable video than the one Logan uploaded and decided to treat us to ‘I Lost My Virginity….’ which use the thumbnail you can see in the picture above.

Unfortunately – or perhaps for most people I should say fortunately – the video doesn’t feature anything like this happening, as it’s just Jake and his friends and their goofy antics, like messing around on a ski slope, trying to lure bears into their cabin, kissing each other at midnight and getting the place lit by spraying cola everywhere. Pure clickbait of the worst kind.

I was tempted not to include the video as it’s so inane and awful and a genuine waste of 15 minutes of your life, but for the sake of completeness here it is. I really wouldn’t advise watching it though:

Hope you didn’t actually bother watching that. Truly awful and I really can’t understand why people wanna watch that crap. I guess that’s why I’m writing for Sick Chirpse and he’s Jake Paul though.

End of discussion really. Should probably try and clickbait my titles even more if I want to reach his levels of popularity. Sure everyone reading this would love that.