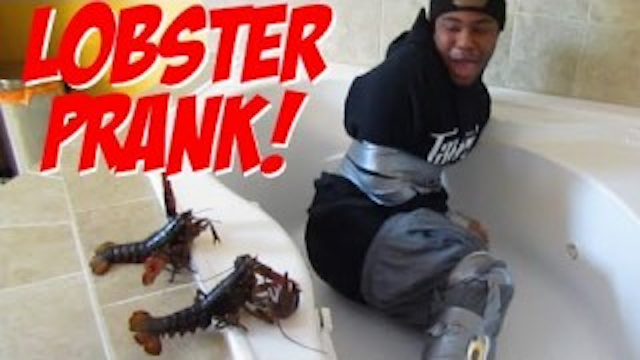 I’m not sure if you could even call this a prank as it’s more akin to some bizarre form of torture.

There’s prank videos and there’s prank videos, and then there’s tying a guy up in a bath tub and unleashing a tray full of lobsters onto him, which I definitely wouldn’t call a prank and would liken more to some bizarre torture. Still, it makes for a pretty funny video.

The guy – who is only known as Durran – was told that he would be taking part in a new video for some new website called WhatTheFunny.com and that he would be tied up with duct tape in a bathtub and then would explain that he was tied up and put in the bathtub because he wasn’t cruising onto WhatTheFunny.com enough. Unfortunately for him, the guys behind the video instead decided to put lobsters – Durran’s greatest fear – into the bathtub with him and film the results.

It looks especially terrifying and cruel because Durran is tied up and can’t do anything to get out of the tub and is literally powerless as the lobsters advance towards him and crawl all over him. And boy does he scream like a little bitch all the way through it. The way he finally gets out of it is fairly classic though.