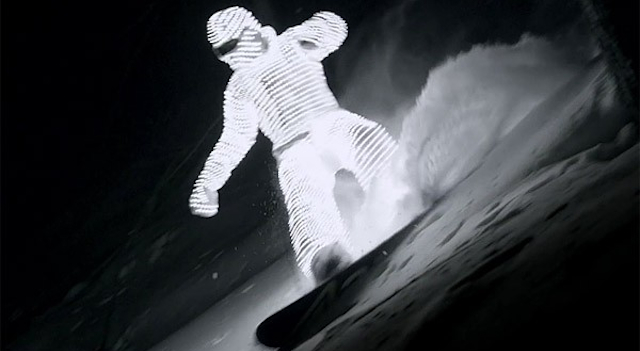 Ever wanted to know what happens when you make a suit out of light and then go snowboarding in it?

The world of snowboarding is ruled by finding new lines to ride and pushing the limits of freestyle, as it always has been. However, when you introduce a guy like Jacob Sutton that makes cool stuff like this, apparently you get a super futuristic alien-technology light suit. Sutton was initially commissioned by Nowness (which is worth checking out here) to make a ski film, but, after realising there are thousands of great ones out there, he decided to do something totally different. Can’t really blame him, as 2013 has seen some of the most motherfucking unbelievable edits, such as Superheroes Of Stoke below:

What he made instead is this suit (drawing obvious parallels to The Silver Surfer), which contains around 5000 LEDs, and has batteries mounted on the rider’s chest. Obviously this was really difficult to film as they were way up a mountain, when lifts are shut, and it was a chilly -25 degrees out, but they managed to film some pretty spectacular stuff.

As it turns out, it’s also really difficult to see anything when it’s pitch black and you’re being dazzled by thousands of white LEDs. Every time the boarder turns he sprays powder up in the air, which the light also reflects off, completely blinding him. And there are loads of trees about. Great. However, the video really speaks for itself, even if for some fucking stupid reason it’s not in 1080p 3D ultra HD.

Underrated Rappers: What Do You Know About Danny Brown?

Man Orgasms Every Time He Hears The James Bond Theme