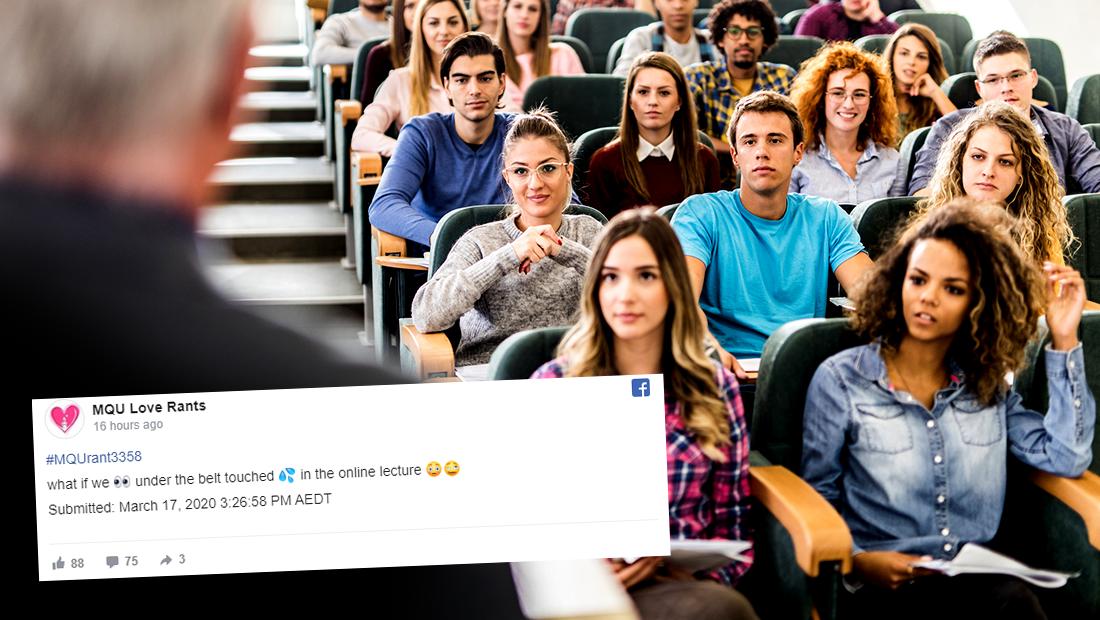 Anyone who has been to university knows that lectures can sometimes be hella boring, but even so I think you’ve gotta be pretty risqué to give someone a hand job during one because the risk of getting caught really is super high.

Nevertheless, students over Macquarie University in Sydney, Australia are attempting to jerk each off during the last of their lectures before lockdown, but unfortunately for them they were caught by the professor and because the lecture was going out live via the internet, it’s now all over the internet as well. Sadly (maybe not sadly) only the audio was recorded, but it’s still pretty funny listening to this lecturer trying to style out awkwardly telling a couple off for performing a hand job in the middle of the lecture.

Here’s the audio and what she said underneath that:

Oh my God. Give me a minute guys, I just want to bleach my eyes and brain. Um, I love y’all but give me one sec. We’re going to have a talk now.

I know that precedent is a very sexy topic and I love when my audiences are excited and animated and engaged, dear Lord, but there’s a limit to that.

If you’d like to have special love time with your partner, there are some perfectly sanitised and malleable bean bags over at News, and I’m sure that there’s an empty cinema around here trying to make the movie Cats work that’s empty. Go for your life.

But, this is the second time I’m saying this in my career, no below-the-belt touching in my lecture theatre, please.

I’m not going to name and shame, but just to clarify this is a mentoring unit so I will give some sort of mentorship here. The strategic placement of the hoodie on the lap only draws the eye more.

I said I was glad they kept the university open today, but now I don’t know.

Damn that sounds awkward and you just know that EVERYONE in class is gonna figure out who the couple involved were almost immediately. I guess if you’re gonna try something like that though then you probably won’t be too embarrassed about it in the first place, so hopefully the two involved don’t die of shame any time soon. Should probably be promoted to total legend status really.