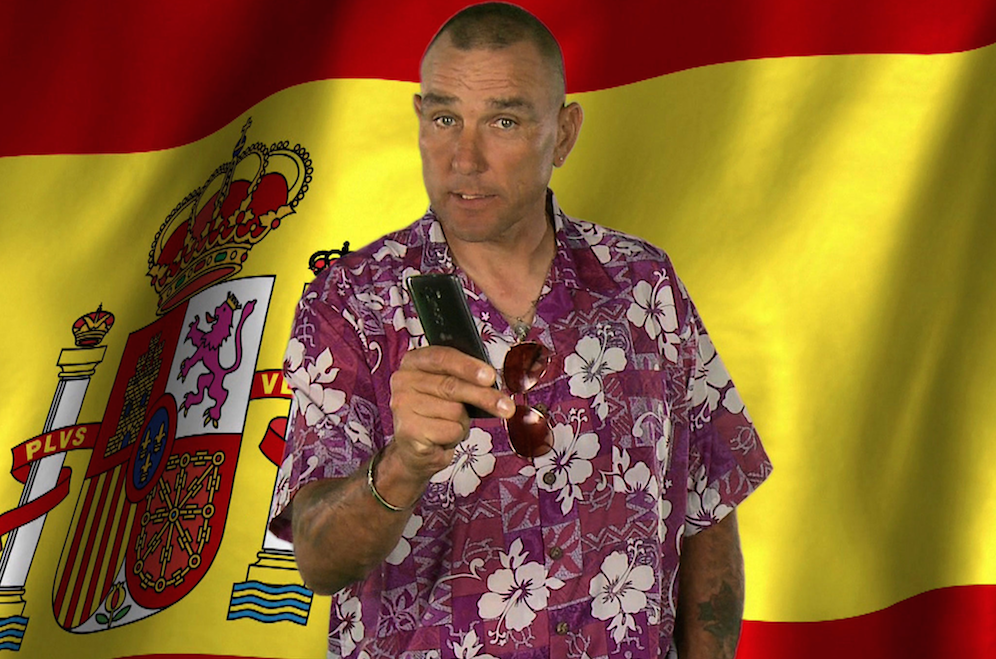 Because he’s obviously the greatest Spanish teacher in the world.

For some reason – it’s either the greatest or worst marketing strategy ever depending on how you look at it – Three have decided to team up with Vinnie Jones in order to promote the fact that you can now use their service in Spain for no extra cost. This means that you can text, call and use data in Spain at no extra cost, which in fairness is probably enough of a story anyway – there really isn’t any need to get Vinnie Jones in to promote it by teaching you some Spanish words. Granted, it probably isn’t as stupid as when he fronted a CPR campaign a few years ago though.

The fact that the video is so low budget as well doesn’t help it – it’s just Vinnie Jones in a weird Hawaiian shirt in front of a super imposed background of a Spanish flag, which then turns into a couple of Spanish backgrounds too. It looks like something that might have been called cutting edge back in 1989.

The lingo he teaches you is also pretty embarrassing and includes informtaitona bout how to take a selfie in Spanish (not really sure why you need to say that to someone as surely you’ll be taking the selfie yourself?) and how to get directions to ‘el bar’ and the beach (la playa in case you didn’t know). In any case doesn’t everyone in Spain speak basic English anyway? Sure, that’s not a reason to rest on your laurels and never learn another language, but it’s unlikely that getting a lesson from Vinnie Jones is really going to prepare you for a trip abroad or is even necessary.

Still, the service Three are offering does sound pretty sick and I guess the fact that they’ve got Vinnie Jones in is getting people talking about it. It’s just so cringeworthy it almost makes me want to boycott the service.