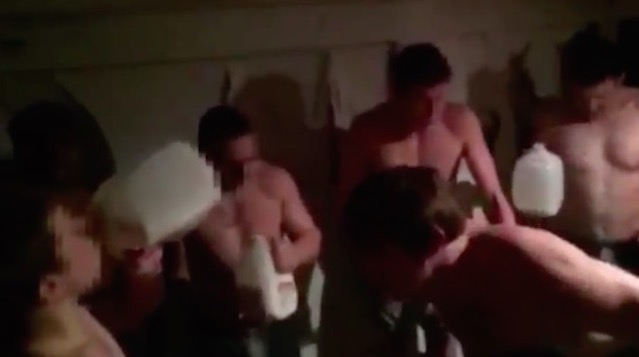 The other day we reported about how a police investigation was underway into the goings on at the Sigma Pi frat house at Hofstra University over in the states, which basically involved a bunch of fucked up stuff going on during the hazing of potential new pledges. You can read the full story here but it basically involved putting people in cages, rubbing hot sauce on their dicks and a bunch of Nazi memorabilia. You should probably go read it.

Anyway, there were only a few photographs available when the story first broke, but now a full on video has emerged of some of the hazing and it’s fucking gross. It involves a bunch of frat bros making their pledges chug big cartons of milk and then forcing them to throw up all over each other. Literally disgusting:

Carnage. The charter of the fraternity has already been revoked by the university after the first pictures were sent to them, but we all know that stuff like this is going on at every fraternity all over the country so it’s hardly done that much good. Why don’t these iditots just fucking grow up and stop torturing people and doing weird homoerotic stuff when they’re initiating people? It’s not the stone age anymore.

For more examples of how dumb and pathetic hazing is, check out the ten most horrific hazing stories of all time here. Messed up.