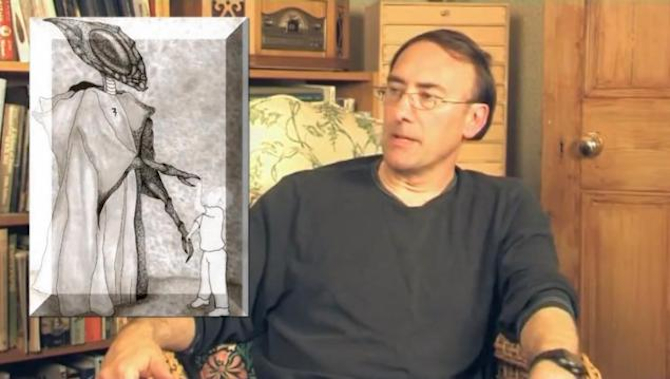 Simon Parkes went on This Morning for an interview about his alien experiences and ended up looking even crazier than he did last week.

Last week we featured this batshit crazy story about Whitby’s Labour Councillor Simon Parkes, who claims that the fact that he has sex with an alien around four times a year is seriously affecting his marriage. There’s a whole lot more to it than that, but that was probably the most outlandish and ridiculous statement in the whole story.

You might want to read that before you continue with this if you missed it, because not only does it provide the background to this story but it’s also probably one of the weirdest things I’ve ever written about on Sick Chirpse. And that’s saying something.

â˜› Here’s The Link: Labour Councillor Claims Sex With An Alien Is Ruining His Marriage

Anyway, when this whole story went national last week due to its sheer ridiculousness, Simon Parkes unwittingly became a minor weirdo celebrity and everyone – much like ourselves – were talking about him and about how weird he was. So, to try and explain this to people and put his side of the story out there, Simon decided to go on This Morning and get interviewed by Philip Schofield and Holly Willoughby. Even though he was pretty articulate in the interview though, he ended up coming off even crazier due to the sheer outrageousness of everything he was saying.

Although his pleas for other people to come forward and talk about their alien experiences because he wants to destigmatise alien visitations as a taboo subject in the modern age are kind of noble (in a very insane way) some of the rest of the stuff he said didn’t exactly do him any favours.I think my favourite section of the interview has to be when he says that he lost his virginity to an alien hologram who was presenting itself as the woman from the Fry’s Turkish Delight advert when he was five. I think he means this woman:

Aside from the fact that losing your virginity to a hologram doesn’t make any sense – a hologram isn’t even really there you know, I think everyone has seen Red Dwarf and knows this – it just sounds really dumb that aliens have nothing better to do than come down to Earth and trick five year old kids into having sex with them while they’re pretending to be holograms. Shouldn’t they be trying to take over the world or something instead?

Most of this interview is really weird (stupid) and there is a LOT of stuff going on in here but Philip Schofield and Holly Willoughby actually keep a straight face and play the interview straight which is pretty impressive considering. Although it’s pretty funny when Holly says ‘Wow’ when he’s describing a spaceship. Like I said Simon is sympathetic and articulate and not in your face crazy like some UFO enthusiasts, but it’s perhaps those people that are actually the craziest sometimes.

Personally I don’t know if Simon Parkes experiences are true or false. I did see this film called Mysterious Skin once though and there seem to be a few similarities between Parkes and some of the characters in that film. That’s all I’m gonna say about that because it’s a pretty sensitive subject but IMDB that film if you want to know more about what I’m talking about.

Sorry about the sound on the video but this was the only version we could find that had the whole thing.