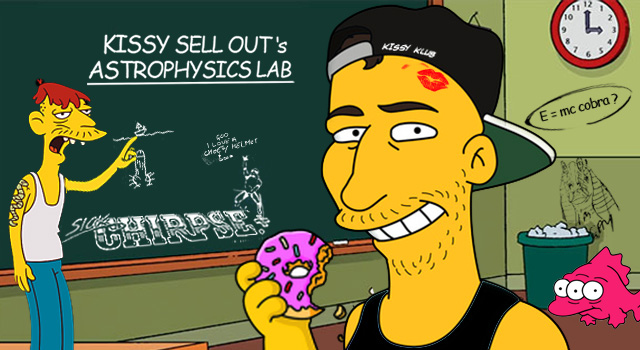 East London’s speed garage DJ legend reveals amazing facts about space and the universe from his experience as a part-time astrophysicist.

I had 5 house parties last week. That doesn’t really relate to this week’s astrophysics fact, but I just want you to know that I’m still cool before I start explaining the next thing.

It begins with me chillaxing and ends with answering questions of life, death and the arrow of time. You see, there was a time when I used to worry about pretty much everything. Would anyone dance at my next DJ gig? Would I make it to the airport on time if I took the northern line? Will King Joffrey ever get killed-off on Game Of bloody Thrones??

Don’t worry ravers, I’m gona explain this quite thoroughly. So slam both your Timberlands on, and let’s jump straight in…

First of all, I need to explain a thing or two about empty space. Well for a start, it’s not empty. In fact there isn’t really any such thing as “empty” in the entire universe.

One of the reasons why space isn’t empty can be quite cutely demonstrated by something called the “Casimir effect“.

This was the unexpected discovery that if you put two uncharged plates near each other in a vacuum, some resistance or repulsion between the plates occurs. This tells us that even in the darkest, coldest, emptiest parts of space, there is “zero-point energy” present. So forget hybrid cars, one day we might figure out how to charge a mobile phone with an empty box!

That is of course, unimaginably small — so we won’t be charging your iPhone with vacuum energy anytime soon!

The types of particles that are created out of nothing come in pairs. Matter and anti-matter pairs to be specific. The example I want you to think about today is the electron and it’s anti-matter evil twin, the positron.

Positrons aren’t really evil. They are just the anti-matter version of an electron. In science speak, you would say that all the quantum parameters are the opposite values of an electron. In simple speak, a positron is an electron traveling backwards in time. These particles don’t stick around for long. The maximum amount of time they can exist is around 10-44 seconds — that’s a 1 with 44 zeros before it. It’s called “planck time” for the same reason that Walter White is called “Heisenberg” in Breaking Bad.*

Particles that pop up out of nowhere and then immediately disappear again are called “quantum fluctuations”. So the deepest layer of the cosmos is always bubbling away like a DJ EZ album on repeat. Hence, this is often described as “quantum foam”.

There are two reasons why you should find all this interesting. The first is because the universe was created by a quantum fluctuation before time existed.*

We suspect this because when astronomers photographed the cosmos surrounding Earth with a microwave telescope, the resultant image reveals a non-uniform distribution of matter, with clumps of soon-to-be galaxies clustered together and huge, gigantic voids of nothingness in between them.

By picking up on thermal signatures only a couple of degrees above absolute zero, this image is of the oldest light in the universe — from only 380,000 years after the big bang. The differences in colour only represent miniscule variations in temperature as the universe had only just finished rapidly expanding during the period we call “inflation”.

So this is essentially an imprint of the quantum foam which spawned the universe. 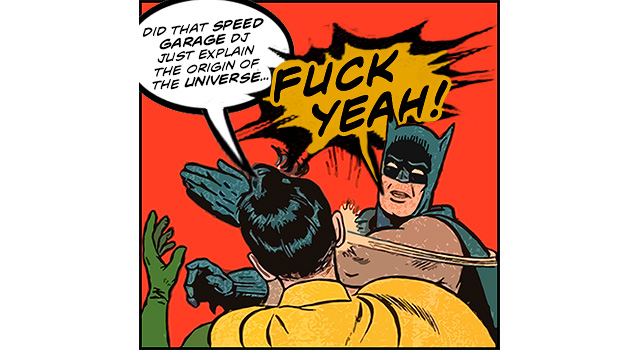 Now here we go… time to wrap this up and line up a pint at the finish line.

Back when I started my second degree, I had to do a boring chemistry module on “reversible thermochemical reactions”. Nothing much to say about that really, we’re not that interested in chemistry here in the astrophysics lab, but there was one thing about these which sent my mind racing. The point of these reactions was that they could go in any direction. The reactants could change into the product, and the product could change back into the reactants.

When an electron and a positron strike each other, they both get annihilated and all their mass and energy is converted into a ray of light (a “photon“). This is also a reversible reaction. A chemist would describe this transformation like this:

…space travelling players like us however, are more in interested in “Feyman diagrams“. I only want to show you one of the them, and it is of an electron-positron pair spontaneously transforming into a photon — I’ve also scribbled something super important on it in pen:

I was very close to my grandfather when I was a boy. He’s passed away now but I still have a vivid memory of him teaching me to whistle for the first time in the back garden. There is no way for me to ever go back to that moment because time only moves forward — or does it?

Well no, time can actually be experienced in either direction. The limitation is that, without the help of a wormhole, the stuff that makes our body and mind can only continue moving through time in the direction it was “born” travelling in.

The inability of humans to stop the passing of time is surely the biggest fear. Every moment that passes can never be revisited and we edge closer to a chess game with the bald guy from Bill & Ted’s Bogus Journey.

But to think about death is totally missing the opportunity of life. When a positron strikes an electron, it is an event that can only ever occur for one single instant due to the opposing directions in which they approach each other in time. Once that instant has happened, it sits there in space-time infinitely. Us humans can never revisit that instant in time, but another positron will pass it at some point — unaware of the dance undertaken by one of it’s relatives previously, but able to pass by that instant in time nonetheless.

When I wake up in the morning, as soon as I’m conscious, I hop out of bed so I can begin my day. When I’m gone, all the moments of my life will be sitting there in space-time as proof that I once existed, and hopefully proof that I lived life to the fullest.

So, uncle Kissy’s advice for this week…

It’s an easy thing to write down, but the point of this week’s article is to show you that there is evidence, right down to the smallest things in the universe, that you should make the most of every moment.

What we do now will be the seeds for the future but also the bread crumbs which describe who you once were. So be someone. Do something good. Do something exciting!

Why shouldn’t you be afraid of dying? Because your memories will live longer than you will. In fact, all the information about your life so far, has been catalogued by the sub-atomic interactions it took to get you here – and they will exist forever.

Next Week: My Stupid Tattoo & The Fate Of The Universe