We speak to the dude who got paid a visit from North Korean officials after putting up a picture featuring the likeness of Kim Jong-un in his shop.

Yesterday two officials from the North Korean embassy paid a visit to M&M Hair Academy in London asking them to take down a promotional poster they’d put up making a mockery out of Kim Jong-un’s infamous haircut (the one he insists all North Korean men get). Despite standing his ground to the officials over the poster Karim Nabbach was left with a dilemma; would he comply with North Korea’s request and keep off Kim Jong-un’s hit list (provided he forgave him) or risk his life by keeping the poster up for as long as he saw fit.

We hit up Karim to find out exactly what went down: 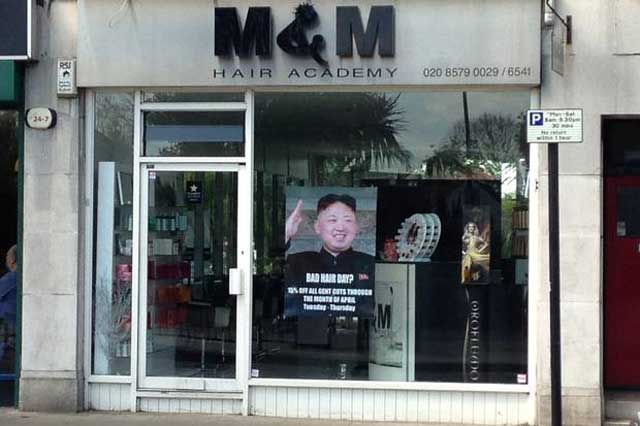 Sick Chirpse: First thing’s first; is the poster still up?

Unfortunately not. The poster has gone from being a harmless ad campaign to being some sort of political statement. I think it has more than served its purpose in bringing attention to the salon.

SC: Whose idea was it to put up the picture?

SC: How has the reaction been other than the two people claiming to be from the North Korean embassy?

To be honest, it’s all been positive stuff. Since the officials came in, the Ealing community have all been showing their support and telling us to keep the ad running. When the news hit, we’ve had even more response from people from Denmark, Sweden, Germany, Croatia and other countries, again praising us for the ad!

SC: Do you believe they’re actually from the North Korean embassy?

I’m pretty sure they were, especially when I’d found out they’d given a police statement.

SC: Can you describe what happened when they came over in your own words for us?

They literally came into the salon, demanded to speak to the manager and pretty much told us that it was an offence to have their country’s leader up on our shop front. When we refused to give our names, they literally replied “I want your name”. We told them that we live in a Democracy, this isn’t North Korea and if they wanted our names and to take this further, they’d need to get their lawyers involved. They responded by saying “We’ll see” and left.

SC: Are you scared that there might be more repercussions from them, considering what Kim Jong-un gets up to in North Korea?

If I lived in North Korea, then yeah, of course. But this is England, we shouldn’t ever feel pressured or threatened by people who have contrary beliefs in how a country should be run and what should or shouldn’t be allowed to be said publicly.