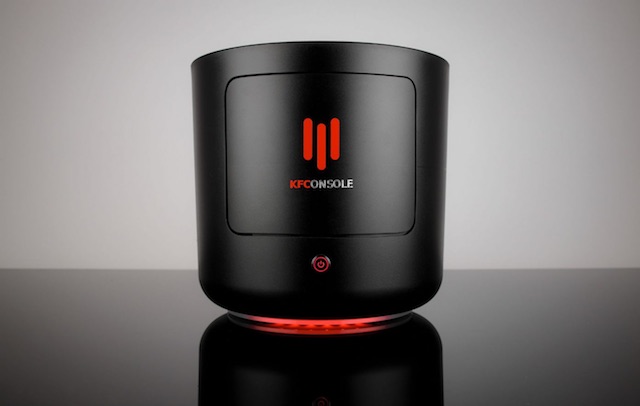 Seems like every brand is creating useless lol inspiring pieces of merchandise these days in the hopes that blogs will write about them and get them some good press – and when it seems to be working so well, why stop? – and the latest one of these is a next generation games console from KFC called the KFConsole.

From the announcement, it looks like this is an actual console in existence, but the lack of a price or a release date would indicate that this isn’t really a product that is going to be readily available. The console comes in the shape of a KFC Bargain Bucket and incorporates a chicken chamber that keeps the console cool simultaneously keeping your meal warm.

For the geeks among you, the console also  contains an Intel Nuc 9 extreme compute element, as well as a swappable GPU slot and has the power of two Seagate BarraCuda 1TB SSDs. It’s also VR ready and can play games 240 frames per second with a 240Hz output. Not really sure what all that means but it sounds impressive and like it might actually be real, or they at least put a bit of effort into it to keep all the nerds happy.

See it for yourself. Find out more about the new #KFConsole @CoolerMaster: https://t.co/omZWuIhBG8 pic.twitter.com/6n5panSJIs

We’re pleased to finally give the fans exactly what they wanted.

We all know the console war is vicious, but we’re very confident in the KFConsole as our flagship entry.

This machine is capable of running games at top-level specs, all on top of keeping your meal warm for you to enjoy during your gaming experience… what’s not to like?

I guess the fact that it isn’t available or ever coming out would be top of that list? I feel like they should at least put ten up for grabs in a competition or something. Seems dumb to go all that effort and then nobody even gets to play it or use it?

For more of the same, check out the KFC secret chicken nugget burger. Tell me more.