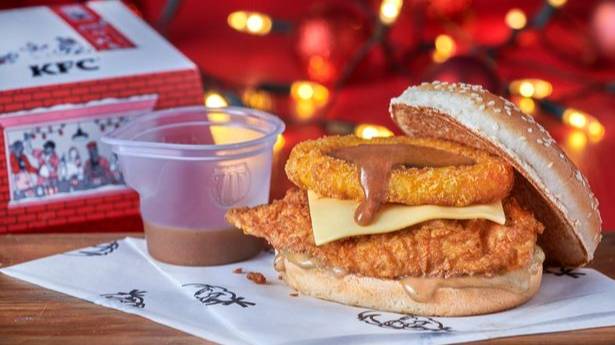 Yesterday, we were talking about how McDonald’s had decided to install a double Big Mac on their Christmas menu and even then I felt a bit uneasy about just how big it was and how I was supposed to fit it all in my mouth, but now KFC have decided to capitalise on this fear in their ad campaign for their Christmas menu. Great idea!

KFC have made The Gravy Box Meal available for this Christmas and it looks pretty amazing, with a burger consisting of a Original Recipe Chicken Fillet, a slice of melted cheese and a hash brown gravy boat stacked inside a sesame seed bun with a layer of Gravynaisse for good measure as well. If you’re wondering what a hash brown gravy boat is, well the concept is quite simple: it’s a special hollowed out hash brown that you can pour extra gravy into for an even bigger gravy experience. Wow.

Extra gravy comes with the meal as well for you to fill up the boat and the meal also comes with an Original Recipe Mini Fillet, a side, a pot of Gravynnaise and a drink. For £6.99, that’s a pretty good deal, however it’s the shade that they’ve thrown at McDonald’s in their ad campaign that’s really won me over.

If you’re like most human beings and don’t possess the jaw of a snake; have a Gravy Burger instead. It’s like eating a warm hug.

Available in restaurant and on Deliveroo from 16th November. https://t.co/w9dQ8oHZNj pic.twitter.com/7CfrBPdxVW

Ooof. It doesn’t take a genius to realise what they’re referring to there and I for one love the fact that they’re rolling up their sleeves and playing dirty as normally that kind of stuff doesn’t get approved by major corporations. Guess it’s time for them to start playing in the mud though this Christmas.

We can only hope that McDonald’s snap back today and there’s a full on social media war with the two brands dissing each other’s products over the festive period. What a Christmas present that would be.

For more of the same, check out this secret KFC chicken nugget burger. Wow.