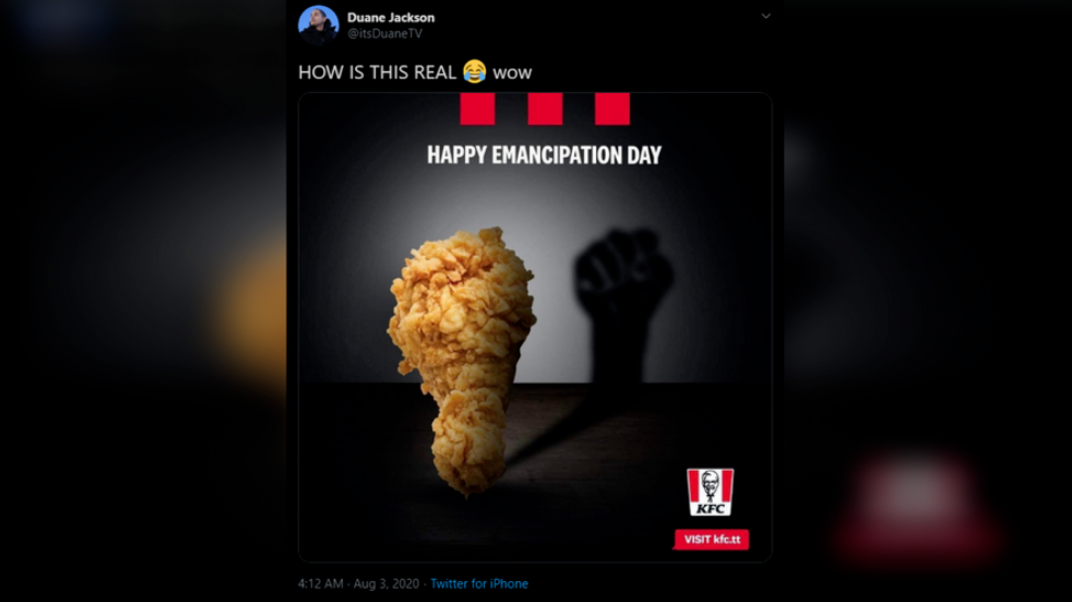 Another day, another company with a major social media faux pas that has a whole bunch of people accusing them of being racist and ignorant even though the whole point of the advert was to show that they are anti-racist.

KFC Trinidad was grilled into removing their advert commemorating the Caribbean nation’s Emancipation Day after adding a silhouette of the ‘Black energy’ fist behind a chicken drumstick:

HOW IS THIS REAL wow pic.twitter.com/hzJD57Xqee

KFC made a huge mistake with that emancipation ad this morning. They pull it one time and replaced it.. I’m sure someone has a screen shot of it

What better way to commemorate the emancipation of slaves than by pointing out that the Black Power symbol resembles a fried chicken drumstick?

Thank you KFC Trinidad for this powerful gesture of solidarity. ✊ pic.twitter.com/u1iwn4xYsB

this is so racist i have to laugh. pic.twitter.com/BuuoojiQW4

How could they not know this was a bad idea? https://t.co/7c2RY35YMz

At KFC Trinidad, we always strive to recognize our nation’s multicultural history and make up, and to play our part recognising it.

Our intention was to support and recognise the importance of this historically significant event. We recognise that our posts commemorating Emancipation Day drew some negative responses. Clearly we got it wrong and we want to unreservedly apologise for the offense caused. As a result, we will be reviewing the approval process of all our communications to avoid situations like this reoccurring.

Have to wonder whether the black people/fried chicken stereotype even exists in Trinidad because that’s the only possible way that KFC Trinidad thought that advert would be a good idea. I mean there’s no way you are putting an image up onto the internet comparing a black fist with a chicken drumstick without getting absolutely annihilated by the Twitter mob. There’s no way KFC doesn’t know that! If the stereotype does exist in Trinidad, did they think everyone would just find the ad funny or what?

Still, it’s nothing compared to the most racist advert of all time from a Chinese laundry detergent company:

For the massive KFC order that led to a police raid and a $26,000 fine – click HERE. Turns out there is such a thing as too much chicken.