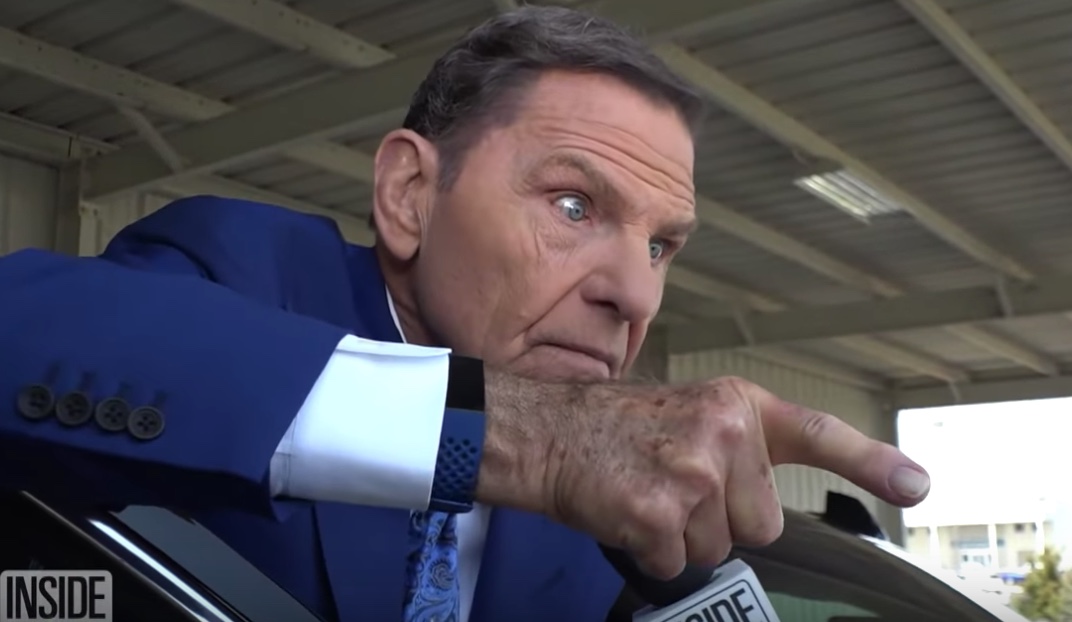 The face of pure evil.

We first wrote about millionaire Christian preacher Kenneth Copeland back in 2016. The man is an utter creep who got rich by lying to naive, vulnerable and gullible followers and stealing their money.

Back when we wrote about him he had just made the claim that ‘demons’ fly commercial, hence why he only uses luxury jets.

Amazingly it took until 2019 for someone to challenge the 82-year-old about these remarks (and his lifestyle in general), and let’s just say he doesn’t exactly cover himself in glory when attempting to answer her questions:

This … is incredible.
American televangelist Kenneth Copeland never foresaw that buying a private jet with money raised by his church would prompt difficult questions.
Reporter does an AMAZING job.
The man actually looks unhinged. pic.twitter.com/JK0zwUdSvO

There’s something properly unsettling about this guy’s demeanour and face. The way he goes from full on wrath to smiling in a matter of seconds is straight up psychotic. He’s literally a Batman villain!

Just so you understand how rich and successful this guy is – he has an airport named after him near where he lives (The Kenneth Copeland Airport). It’s near the 1,500 acre Kenneth Copeland Ministries campus and his $6.3 million lakefront mansion in Newark, Texas. He also owns 22 churches in the area – imagine the donations this creepy fuck is taking in every week.

As you heard in that clip he also bought Tyler Perry’s private jet, has a $500,000 Mercedes Maybach and a $500,000 Rolls Royce Phantom. Just a humble televangelist trying to spread the word of God, clearly.

Obviously we’re all just haters who need God in our lives though. But seriously, if you give opportunist crooks like this guy even a single penny you are a mouth-breathing idiot, end of.

For a collection of videos we put together showing the swift mental decline of televangelist Bruce Howard, click HERE.