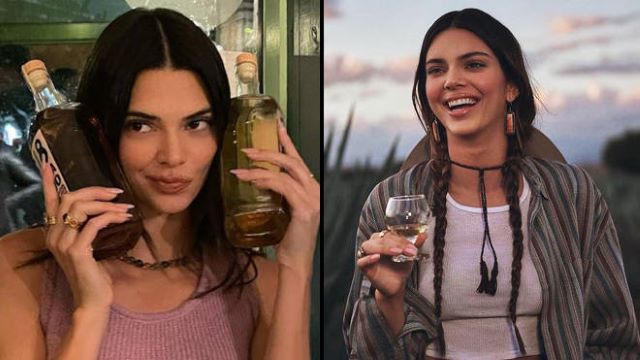 Kylie Jenner may be winning big on social media at the moment following her response to The Daily Mail’s article about her, but sister Kendall is having the opposite experience after starring in a set of adverts for her new tequila brand ‘818’.

You can check out the images Kendall shot by clicking through the IG set below:

Not only were people vexed with the way Kendall Jenner is styled in those photo, they are also furious about the fact she’s releasing her own tequila brand in the first place….

And not to mention profit off the brown hands that actually plant, grow, harvest ferment and distill the agave plants in Jalisco

Kendall Jenner only worked on this new tequila she’s making for 4 yrs, yet call it the best tequila she’s had? Homegirl didn’t even have the audacity to wait the 6-8 yrs to see to process of how agave is grown & labored. The disrespect!!Anyways stick to buying ur local Tequila.

YOU’VE GOT TO BE KIDDING ME…..leave it to Kendall to be as tone deaf as possible, this is so offensive. Modeling that chic migrant worker look for her tequila brand, watch her cry and say she didn’t know later on for the 100th time 🙄😠 pic.twitter.com/7n4VypvSVv

Funnily enough, no one seemed to have a problem with Jay-Z ‘appropriating’ Russian culture when making his own vodka brand, or even The Rock or George Clooney when they released their own individual tequila brands. Could it be that this sort of recreational vitriol is reserved for a certain type of celebrity that people just love to sh-t all over?

That being said – there’s no way Kendall Jenner and her PR team didn’t see this coming. She’s been in this game long enough to know how it works by now, so maybe she just doesn’t care. An ‘all publicity is good publicity’ sort of thing perhaps. Either way she’ll probably put out an apology at some point just because that’s what celebrities do and then she’ll just go ahead and make a billion dollars selling the tequila anyway.

Here she is serving it up at a party!

Even when the Kardashians lose, they win.

For Kendall’s excellent response to trolls who accused her of being “passed around” by NBA players, click HERE.