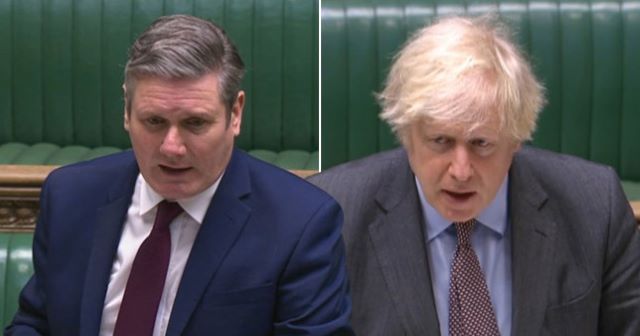 According to Tory MP Mark Francois who spoke to The Sun earlier, Keir Starmer had to be ‘led away’ from Boris Johnson after they got into a heated face-to-face argument outside the Commons following a terse Prime Minister’s Questions.

The pair initially clashed in the Commons after Boris accused Starmer of repeatedly calling for the UK to stay in the European Medicines Agency after Brexit, which he says would have hampered the country’s Covid-19 vaccine rollout.

The Labour leader and Prime Minister were then seen continuing their conversation as they left the Commons together, before coming to a halt just outside the chamber.

Eyewitnesses say the pair were having a ‘heated discussion’ about the PM’s remarks, allegedly resulting in Sir Keir being ‘led away’ by ally and Labour whip Chris Matheson.

It’s worth noting that Matheson has called the claims ‘absolute bollocks’, adding:

There was a brief chat and then Keir and I left together.

Nothing more to it than that.

Tory MP Mark Francois had another view on it though:

As I was walking out of the chamber, I saw Sir Keir and PM standing near the entrance to the aye lobby.

He was puce with anger, and wagging his finger aggressively at the PM, who was telling him to check the record.

An ‘anonymous eyewitness’ also told the paper that Sir Keir had ‘a bit of a meltdown’. It’s worth remembering The Sun can pretty much claim anything they want as long as it conveniently came from an ‘anonymous eyewitness’, but either way, it seems one of either Tory MP Mark Francois or Labour MP Chris Matherson is talking shite. Who to believe?

It does make you wonder – who would win in a fight? Boris Johnson or Keir Starmer? Don’t be fooled by Boris’s clownish appearance and clumsy demeanor – the guy can do some damage:

He is a bit longer in the tooth now though and got battered by Covid recently, so you have to think Sir Kier would put a beating on him, especially with how angry it sounds like he was, if The Sun’s report is to believed.

Anyway, we’ll see who comes out on top where it really matters; at the next UK election… in 2024. Sigh. It may be a long way off, but as it stands, things aren’t looking good for Boris.