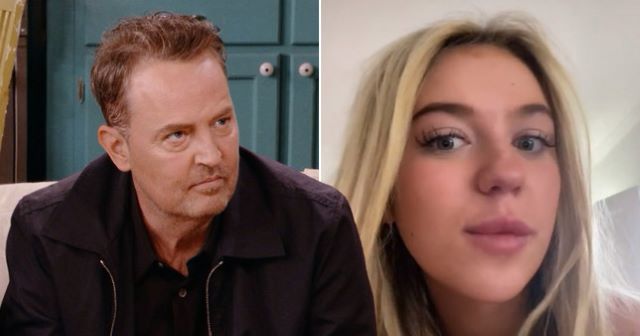 The TikTok user exposed a cringey FaceTime conversation between her and the Friends star.

A 19-year-old TikTok user who matched with Matthew Perry on dating app ‘Raya’ claims she’s being blamed for his recent break-up from fiancée Molly Hurwitz.

As we revealed last month, the girl had recorded her FaceTimes with Perry and leaked part of the footage online, embarrassing the Friends legend who appeared to be chatting up a girl 32 years younger than him…

Personal assistant Kate Haralson, who has now been banned from the app for ‘breaking privacy guidelines’, reckons she is being blamed for Perry’s split from Hurwitz.

Matthew Perry and fiancee split everyone blames me lol.

When asked if Matthew was dating Molly at the time of their FaceTime, Kate defiantly wrote:

No! They were on a break.

Well, maybe they were on a break (shout out Ross & Rachel), but even still, it can’t have been too much fun discovering that her fiancé was chatting up teenagers on a celebrity dating app while they were taking some time apart. What was Matthew Perry thinking?

At the time, Haralson had said:

It felt kind of weird talking to someone my dad’s age and it just felt not right, especially when he knew how young I was.

A lot of people were saying I’m a bully and mean for posting this, and it made me feel kind of bad, but at the same time, I feel like a lot of guys in Hollywood are talking to all these young girls and it’s something that I think a lot of people should be aware of.

Yeah, this girl is a total dick for screen-recording their interaction and sharing it with the world, but I just can’t believe someone who’s been in the game for as long as Matthew Perry didn’t see this coming. Even Joey Tribbiani wouldn’t be that dense! Come on Chandler – you’ve got to be doing better than that.

This all came just days after Ben Affleck went viral for a similar video after matching a woman on the same dating app. Maybe best these celebs stick to meeting people in the real world for now.