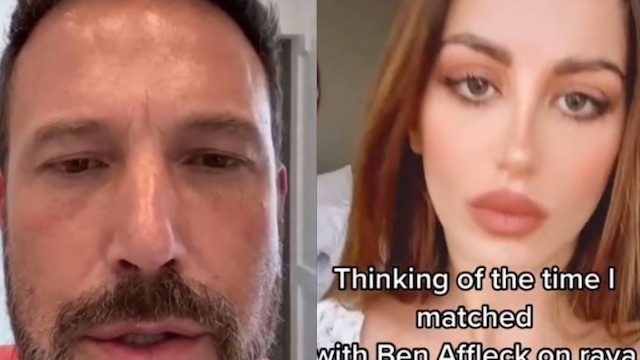 I think most people think of Ben Affleck as a fairly cool guy, but he’s definitely done some questionable things over the course of his lifetime, with the most obvious ones being having a major affair with his nanny, getting an awful back tattoo and that really funny meme of him smoking a cigarette.

The latest of these that might affect his reputation is a somewhat desperate video of him sliding into some woman’s DMs after she unmatched him on super exclusive dating app Raya because she didn’t believe that he was the real Ben Affleck. This is actually unbelievably funny and downright weird, but I guess that’s just the point of his life that Ben Affleck is at right now:

TikToker is going viral after sharing the video Ben Affleck sent her after she unmatched with him on dating app Raya:

“Why did you unmatch me? It’s me.” pic.twitter.com/3R31AJPHWM

Lol. I’ve literally watched that at least ten times and I’m still not bored of it. Such a weird flex from Ben Affleck as surely it’s hardly like he’s going to find it tough to match with anyone on Raya. Just move onto the next one – doesn’t he realise that doing stuff like this is just going to make him even more a meme, which he definitely hasn’t enjoyed in the past? Kinda worried about the guy to be honest. Hope he isn’t drinking again after his most recent break up with Ana de Armas.

For more of the same, check out this really creepy and weird video of Ben Affleck from back when he was a young guy in Hollywood. Doesn’t pain him in the best of lights.