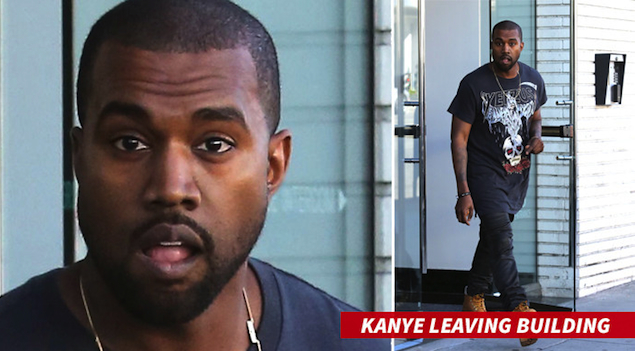 This isn’t really that surprising a headline, but the story behind it is one of the most ridiculous yet.

Of course Kanye West allegedly attacked an 18 year old at a chiropractor’s office – of course he did. TMZ posted this report last night (of course TMZ did) which tells the whole story, and as with most stories involving Kanye West, it’s completely and utterly ridiculous.

It turns out that Kim Kardashian was heading to this chiropractor’s in Beverly Hills and as usual she was completely swarmed with paparazzi. This 18 year old kid was just minding his own business and decided to hold the door for Kim as she entered the building, but also decided to offer a comment on the situation, saying ‘Fuck these faggot-ass niggers’. Big mistake.

Kim informed him that it wasn’t appropriate to use the word niggers in polite company (although apparently faggot ass is fine) and this sent the kid into a bit of a meltdown, leading him to reply with something along the lines of ‘Fuck you, bitch. Just trying to help you. Shut up, nigger lover, stupid slut,’ which seems a bit unnecessary but hey this IS Hollywood and a Kanye West story.

Immediately, Kim got Kanye West on the blower and he headed down to the chiropractor’s office, which is where this 18 year old kid was sitting around, I guess waiting for his appointment. Kanye wasted no time rushing in there and punching the guy right in the face, whilst Kim was screaming ‘we have it all on tape!’ I assume she’s referring to the racist language the kid is using, but I’m not really sure if that will be enough to justify an assault by a man in his mid 30s on an 18 year old kid, even if that man is Kanye West. Or maybe she meant they had the assault on tape so they could go home and watch it later and chuckle about how it was really cool that Kanye beat up a little kid. Either/both seem like strong possibilities.

A massage therapist (lol) had to separate the two men before the cops arrived at the scene. The 18 year old wants to press charges and Kanye is expected to be interviewed regarding the incident fairly shortly. Another day in the life.