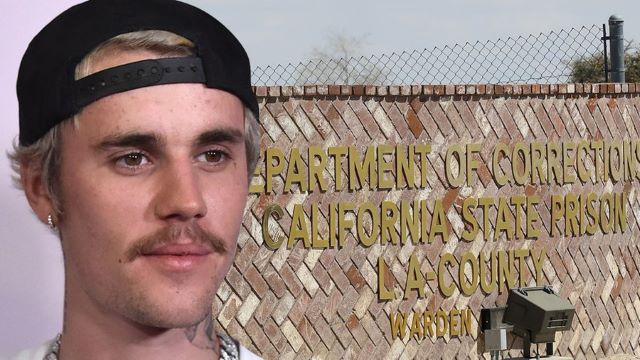 Did they give him a tour of the showers in return?

It’s no secret that Justin Bieber has gone a bit religious in recent years. Which makes sense – I mean, if I were a pop star and babe magnet worth $285m at 26 years of age, I would thank God every day too. But I wonder – is God as real for people wasting away behind bars as He is for someone like Bieber?

Well either way, Justin Bieber visited a California state prison in Los Angeles this week to ‘spread the word of God’, according to TMZ:

Justin Bieber is back in L.A. after a break in the islands, and one of his first orders of business is telling prisoners about the big man upstairs. The singer’s RV was spotted Tuesday pulling into the California State Prison of L.A. County — which prompted the question … what the heck is he doing there, especially on the heels of his Turks and Caicos weekend getaway with the missus?

The answer, according to the California Department of Corrections and Rehabilitation, is quite simple — the Biebs was there to spread the good word.

A rep for the CDCR tells TMZ the warden of the state prison signed off on a brief visit for him and his pastor to support faith-based programs. We’re told COVID protocols were followed to a T, and it all went smoothly.

Well, good to hear it all went smoothly. Must admit my first thought when I heard Justin Bieber would be preaching to a room full of murderers and rapists was that we were heading down a very slippery slope indeed. But it turns out the convicts were happy to listen to Bieber telling them about the big man upstairs. Which makes sense because if I were in prison I’d probably wander over too and listen to what he had to say. Not like there’s much else going on, and plus it’s a great story to tell at parties if you ever get out.

Wonder if Bieber rounded off his presentation with a medley of a few of his hits? Come to think of it I’m not sure the inmates would care for his particular style of music, but who knows? Maybe his new song ‘Peaches’ is exactly the sort of tune violent criminals need to be listening to behind bars. Take it away, Justin!

For the prisoner jailed for 217 years for murdering 48 of his fellow inmates, click HERE. How about a 1-on-1 prayer session with Justin Bieber? Would sort him right out.